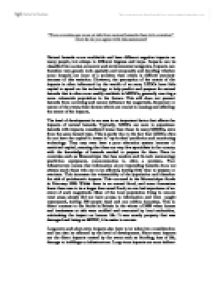 &quot;Poor countries are more at risk from natural hazards than rich countries&quot; How far do you agree with this statement?

"Poor countries are more at risk from natural hazards than rich countries" How far do you agree with this statement? Natural hazards occur worldwide and have different negative impacts on many people, but always to different degrees and ways. Impacts can be classified into social, economic and environmental categories. Impacts can therefore vary greatly both spatially and temporally and deciding whether some impacts are more of a problem than others is difficult precisely because of this variation. However, the perception of the extent of the impacts is often influenced by the wealth of an area; LEDCs have little capital to spend on the technology to help predict and prepare for natural hazards that is often more readily available in MEDCs, generally creating a more vulnerable population in the former. This still does not prevent hazards from occurring and cannot influence the magnitude, frequency or nature of the event; three factors which are crucial in causing and affecting the extent of the impacts. The level of development in an area is an important factor that affects the impacts of natural hazards. Typically, LEDCs are seen to experience hazards with impacts considered worse than those in many MEDCs, even from the same hazard type. ...read more.

LEDCs can find this more difficult. Disease is a common problem after a hazard event. Once people have been evacuated they have to be housed in temporary accommodation and because of the lack of capital and adequate medical resources the camps often lack sanitation and clean water. After the El Salvador landslide in January 2001, 15,000 people were thought to need food supplies and three million people were believed to be without clean water. In these cramp and unsanitary conditions diseases such as typhoid and cholera can easily spread. This does not mean that impacts are 'more of a problem' merely as a result of economic development. Impacts of hazards are influenced by many variant factors. One such factor is the spatial distribution of a hazard, where the event occurs and its land-use. For example, hurricanes hit both Bangladesh in November 1970 and in Camille, USA in August 1969. Four million seven hundred thousand people were affected by the hurricane in Bangladesh whereas one million nine hundred thousand were affected in the USA. Although the Bangladesh hurricane hit a more rural area, with a naturally lower population density than Camille, it still affected more Bangladeshi people than USA residents. ...read more.

In terms of the economy it cost $200 billion in damages in Kobe compared to $40 billion in Northridge. This example illustrates that the impact of hazards can be very problematic in MEDCs as well as LEDCs. In conclusion therefore, it is apparent that the impacts of all hazards are dependent on a range of factors, including the development of an area. This does not mean that all impacts are 'more of a problem for people in LEDCs.' Impacts can often be very problematic for MEDCs, as the Kobe earthquake illustrates. Impacts are not totally determined by technology or equipment affordable to MEDCs, magnitude and frequency are very important factors - if an event is of unprecedented magnitude, then very little can be done to ease impacts except when dealing with the aftermath. The Mozambique floods in 2000 illustrated that point but it also showed that impacts are partly affected by development because often the main difference between MEDCs and LEDCs in their ability to overcome natural hazards is their ability to respond and manage the impacts. MEDCs, more often than not have the money to invest in research, in education, infrastructure, emergency services and emergency strategies. This is the reason that MEDCs are perceived to be able to cope better with the impacts; they can overcome the long-term impacts much easier compared to LEDCs. ...read more.