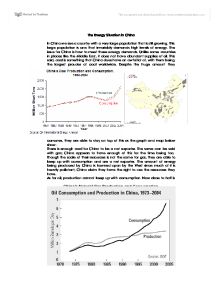 The energy situation in China

The Energy Situation in China In China we see a country with a very large population that is still growing. This large population is one that invariably demands high levels of energy. The issue for China is how to meet these energy demands. Unlike some countries in places like the Middle East, it does not have abundant supplies of oil. This said, coal is something that China does have an awful lot of, with them being the largest prouder of coal worldwide. Despite the huge amount they consume, they are able to stay on top of this as the graph and map below show: There is enough coal for China to be a net exporter. The same can be said with gas; China appears to have enough of this for the time being too. Though the scale of their resources is not the same for gas, they are able to keep up with consumption and are a net exporter. ...read more.

The graph below shows this increasing reliance on overseas oil: China's energy needs are projected to be at over 150% of what they are now by 2020. The current number of cars is 90 times that of 1990, with petrol prices a third of those in Europe. To deal with such issues, China is looking to invest in developing countries with proven supplies of oil as this is much cheaper than buying oil on the open market. Sudan is a case where they have done this. There was much controversy due to the trading of arms for oil between the two countries as Sudan needed weapons for their civil war. The emphasis on Africa is shown to the left. Other deals that have taken place include one with Indonesia, Australia, Uzbekistan, Colombia, Ecuador and Nigeria [see slide show for more details]. This increase in global trade is causing friction with countries such as India. ...read more.

The graphs below show the overall energy situation as well as a prediction of the future in terms of population. So, looking forward it is clear that China is going to have to do something about the energy in the country itself to try and minimize exports. Recent news has claimed that China will be looking into renewable energy in quite some depth. An ambitious energy plan reports that 15% of energy will come from renewable resources by 2020 (it is currently at 8%). Emphasis is particularly being put on wind power and hydroelectric power (wind to increase by 23 times, hydroelectric predicted to almost double in production). Solar power is being looked into although it is more expensive; some of the work done in this area will be to do with connecting the systems to power grids rather than having them work individually. The entire cost of the increase in renewable energy is thought to reach around $133.3 billion. ?? ?? ?? ?? ...read more.