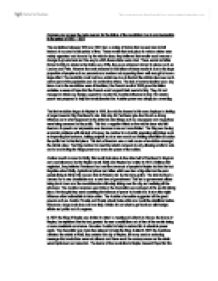 Compare and access the main reasons for the failure of the revolutions due to poor leadership in the period of 1815 - 1831 The revolutions between 1815 and 1831 had a variety of factors that caused them to fail instead of succeed in this period of time. These revolts that took place in various states were mainly organised and founded by the middle class, they believed that revolts would ensure a change in government and the way in which these states were ruled. These secret societies formed in Italy to enhance the Italian way of life, they even schemed abroad in places such as London and Paris. However the main reasons for the failure of these results is due to the large proportion of people such as peasants and workers not supporting them well enough to have a large affect. The revolution could not be a social one due to the fact the middle class was such narrow part of the population and did not involve others. The lack of communication was a key issue due to the revolutions were all localised, the French revolt of 1830 gave the Italian societies a sense of hope that the French would support their needs in Italy. ...read more.

He kept his connection with the Carbonari by publishing books and pamphlets. Despite the efforts of the revolutions in Naples and Sicily, ultimately power was restored and the trade guilds were abolished as many revolutionaries were associated with being craftsmen. This prevented any future attempts of a revolt. It was relatively difficult for secret societies to get in contact in Italy after the revolts that occurred in Naples and Sicily. However many secret societies did manage to scheme revolutionary thoughts abroad particularly in London and Paris. The French revolution in 1830 raised the hopes of many Italian nationalists as they expected the French to assist them in their quest for unification. All these small rebellions did have a large affect on why the revolutions failed because they didn't get enough backing from other people in their state to have a large scale influence amongst the state. The revolt in Piedmont was influenced by secret societies such as the Carbonari, they pushed forward different demands. Victor Emmanuel had seen a return to power as King and the Carbonari wanted a constitutional monarchy which seemed to be their ultimate aim overall meaning the destruction of Austrian influence in Italy but this would require a revolution. ...read more.

Broad support for these revolutions did not exist. Secret societies were the main reasons for the revolts in the first place such as the Carbonari. Socially, the revolutions appeared narrow to the general public as only accounting for the middle classes dominantly such as in Naples the Carbonari made 5% of the male population which is a low amount. The secret societies aims were not social aims, but more constitutional and driving for a new power of government and extend their own classes power. I believe a main reason for the failure of the revolt was that it failed to attract foreign support for example the French revolutionaries did not aid the Italian cause due to the overwhelming Austrian control. In 1831 Louis Philippe, the French King, stated "We do not recognise the right of any people to force us to fight in its cause, the blood of Frenchmen belongs to France alone." This quote crushes the Italians hopes for unification. Comparing this lack of support to the fact the revolutions were all separate causes shows why the French failed to assist, Italians identifying themselves through their states rather than as their country as a whole only furthered the failure and showed Austria that they were weak when divided. The revolutions were unable to contend with the overwhelming forces of the Austrians. ...read more.