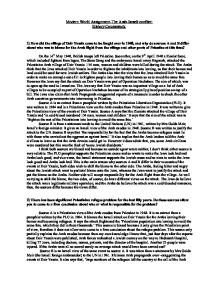 Modern World Assignment-The Arab-Israeli conflict: History Coursework. 1) How did the village of Deir Yassin come to be fought over in 1948, and why do sources A and B differ about who was to blame for the Arab flight from the village and other parts of Palestine at this time? On the 14th May 1948, British troops left Palestine. Soon after, on the 9th April 1948 a Zionist force, which included fighters from Irgun, The Stern Gang and the embryonic Israeli army Haganah, attacked the Palestinian Arab village of Deir Yassin. 154 men, women and children were killed during the attack. The Arabs think that the Jews attacked Deir Yassin in order to frighten the inhabitants into leaving, so that their homes and land could be used for new Jewish settlers. The Arabs also take the view that the Jews attacked Deir Yassin in order to make an example out of it: to frighten people into leaving their homes so as to avoid the same fate. However the Jews say that the attack on Deir Yassin was part of Operation Nachshon. The aim of which, was to open up the road to Jerusalem. ...read more.

Source A is a Palestinian view of the Arab exodus from Palestine in 1948. It is an extract from a pamphlet written by the PLO in 1984. It blames the Israeli attack on Deir Yassin for the Arabs leaving their homes and becoming refugees. It says the attack frightened the 'Palestinian population into leaving to avoid the same fate, which they did in there thousands.' This source is biased because it only gives the Palestinian point of view, therefore it does not allow us to come to a firm conclusion about the refugee problem. This source only partially explains the Arab exodus because from my own knowledge I know that, just four days after the reports about Deir Yassin were published, Arab forces ambushed a Jewish convoy on the way to Hadassah Hospital, killing 77 Jews, including doctors, nurses, patients, and the director of the hospital. Another 23 people were injured. If the Arabs were all so scared surely no revenge attack would have been carried out? Source B is an Israeli view of the same event as source A. It was taken from a statement by Mrs Golda Meir (the Israeli foreign ambassador) ...read more.

Sources C and D contradict each other and both giving only 'one side of the story.' Like source C, source D is biased and so again no firm conclusion can be drawn from this source. Source F is a photograph showing a Palestinian demonstration. The photo shows two women, a Palestinian and a Jew, holding banners demonstrating about their rights to live in Palestine. One banner says, 'I am a Palestinian Arab. I was born in Jerusalem. Palestine is my homeland. But I cannot return there.' The other banner says, 'I am an American Jew. I was born in U.S.A. Israel is not my homeland. But I can "return" there. The picture was taken outside the Israeli embassy in December1973. The information given tells us that the same two women were photographed in 1993 carrying the exact same banners. As well as giving the view of an Arab, it also gives us the view of an American Jew. This shows us that not all Jews agree with the Jewish handling of the refugee problem. Although it is unreliable because it only gives one point of view, it does show us that in 20 years nothing has changed. The two women are still carrying the same banners as they were 20 years ago. ...read more.