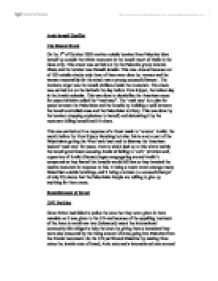 Arab Israeli Conflict The Recent Event On the 5th of October 2003 another suicide bomber from Palestine blew herself up outside the Mixin restaurant in the Israeli resort of Haifa in the Gaza strip. This attack was carried out by the Palestine group Islamic Jihad, and the bomber was Hanadi Jaradat. This was unusual because out of 103 suicide attacks only three of them were done by women and the woman responsibly for the attack was a young successful lawyer . The bombers target was the Israeli civilians inside the restaurant. The attack was carried out on the Sabbath the day before Yom Kipper, the holiest day in the Jewish calendar. This was done to destabilise the American cause for peace initiative called the "road map". The 'road map' is a plan for peace between the Palestinian and the Israelis by building a wall between the Israeli controlled areas and the Palestinian territory. This was done by the bomber strapping explosives to herself, and detonating it by the restaurant killing herself and 19 others. This was carried out in a response of a threat made to 'remove' Arafat, the month before the Yom Kippur Bombing but also this is a act a part of the Palestinians getting the West bank back and to disarray the American backed 'road map' for peace. ...read more.

2 Sykes poiot 1916- England needed to guarantee Frances support in the extensive Turkish empire between England and France. 3 Balfour declaration 1917- The war is at a stalemate and England needs the USA's help- but the USA was reluctant to join because it was a European war 3000 miles away. So the influential American Jews were contacted and promised their own homeland-if they managed to get USA to join in the war. They did join but now the land had been promised to the Arabs, Jews and the French. British mandate and the partition The scale of World War 1 was so big and destructive, that there was a determination to avoid any future disagreement escalating into war. So the League of Nations was set up to help this. The League or Nations wanted some of countries effected by the war, to organise what should happen to the defeated countries empires. It was decided that Palestine should be supervised by Britain until it was ready for independence. After World War 2 lots of Jews desired to return to the Promised land but after a while the English had to halt the tide of Jews coming into Palestine. Those who came in illegally had to be sent back to where they had came from. Enraged Jews already in Palestine began to exert pressure on the English by killing Arabs and English but especially Palestinian gangs like the Irgun gang. ...read more.

Which lead to the first Intifada which lead to the creation of the PLO which set up terrorist attacks on Israel. An not so important factor is the leader of the PLO, Arafat, tacking a more peaceful approach and using politics to solve things but he gets accused of not being able to control terrorist groups which then makes the terrorist groups kill more Israelis, and it also makes the Israeli priminister 's more hard line to try and get rid of these groups which is all linked into nationalism. Which has lead to the recent event the 5th of October bombing. I think that the Diaspora which lead to the land being vacated by the Arabs and the holocaust and nationalism with religion tied in are the most important factors, because if the Diaspora nether happened then they wouldn't get persecuted and the Arabs would have nether moved into the land and there would be no conflict. But if the Diaspora did happen but there was no holocaust then the world not have been sympathetic and given them half of Palestine so there would be no conflict. If Zionism was nether founded then the Jews would not have moved into Palestine, but because of there religion they would of come back to Palestine anyway because that was there promised land. But the defining point which made all these events happen which lead to the 5th of October bombing was the Diaspora and persecution. ...read more.