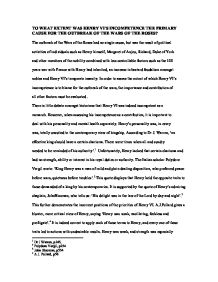 TO WHAT EXTENT WAS HENRY VI'S INCOMPETENCE THE PRIMARY CAUSE FOR THE OUTBREAK OF THE WARS OF THE ROSES?

TO WHAT EXTENT WAS HENRY VI'S INCOMPETENCE THE PRIMARY CAUSE FOR THE OUTBREAK OF THE WARS OF THE ROSES? The outbreak of the Wars of the Roses had no single cause, but was the result of political activities of individuals such as Henry himself, Margaret of Anjou, Richard, Duke of York and other members of the nobility combined with less controllable factors such as the 100 years war with France with Henry had inherited, an increase in bastard feudalism amongst nobles and Henry VI's temperate insanity. In order to assess the extent of which Henry VI's incompetence is to blame for the outbreak of the wars, the importance and contribution of all other factors must be evaluated . There is little debate amongst historians that Henry VI was indeed incompetent as a monarch. However, when assessing his incompetence as a contribution, it is important to deal with his personality and mental health separately. Henry's personality was, in every was, totally unsuited to the contemporary view of kingship. ...read more.

While it sat as Westminster, the King was frequently absent from the capital'.5 This quote demonstrates an obvious shortcoming of Henry. His absence from Parliament was a direct indication of his disinterest in his kingly duties. The quote also reminds us that we cannot put full blame on Henry's Council for their increasingly powerful roles. John Watts is less critical of courtiers than most and claims they were simply filling a void created by the absence of an active king. McFarlane is strongly critical of Henry where the rising power of others was concerned. He wrote 'his personal lack of fitness was the cause, not the weakness of his office and his resources'.6 Wolffe wrote that Henry 'dissolved the unity and purpose of the realm and made all his advisers seem like knaves or fools or both'.7 Wolffe agrees that Henry was in part the most responsible for the actions of his Council. Henry's absence and disinterest in royal matters were not the only problems of his incompetence. ...read more.

Henry's sudden deterioration of his mental fitness had caused further conflict between his wife and Richard, Duke of York, giving additional stimulation to the quarrels which led to the Wars of the Roses. A certain amount of blame for the outbreak of the Wars has been placed, by some historians, on the faults of Henry's Council, above all on the 'over-mighty nobles' who sought power beyond their duty, most prominently Richard, Duke of York. The general view amongst historians is that Henry was in fact responsible for the growing confidence of subjects in his office, for example McFarlane wrote that 'only an undermighty ruler had anything to fear from overmighty subjects'.9 It is indeed 1 Dr J Warren, p245, 2 Polydore Vergil, p234 3 John Blacman, p534 4 A.J. Pollard, p56 5 R L Storey, The End of the House of Lancaster, p35 6 McFarlane, The End of the House of Lancaster, p456 7 John Watts, Henry VI and the Politics of Kingship, p108 8 A.J Pollard, The Wars of the Roses, p 56 9 The Origins of the Wars of The Roses, Keith Dockray, p65 ...read more.