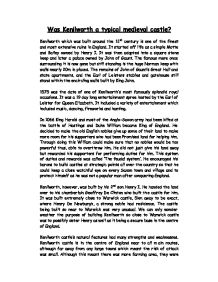 Was Kenilworth a typical medieval castle?

Was Kenilworth a typical medieval castle? Kenilworth which was built around the 12th century is one of the finest and most extensive ruins in England. It started off life as a simple Motte and Bailey owned by Henry I. It was then adapted into a square stone keep and later a palace owned by John of Gaunt. The famous mere once surrounding it is now gone but still standing is the huge Norman keep with walls nearly 20m in places. The remains of John of Gaunt's Great Hall and state apartments, and the Earl of Leisters stables and gatehouse still stand within the encircling walls built by King John. 1575 was the date of one of Kenilworth's most famously splendid royal occasions. It was a 19 day long entertainment spree hosted by the Earl of Leister for Queen Elizabeth. It included a variety of entertainment which included music, dancing, fireworks and hunting. In 1066 King Harold and most of the Anglo-Saxon army had been killed at the battle of Hastings and Duke William became King of England. He decided to make the old English nobles give up some of their land to make more room for his supporters who had been Promised land for helping him. ...read more.

This resulted in the Normans not only building square keep castles but building shell keeps too as these could be built upon the motte itself, Warwick was designed like this. Kenilworth was no exception it too probably stated off life as an earth and timber castle. It had all the features of a typical Norman castle as it comprised of a rough circular enclosure about 200 feet across made from Earth and timber built on top of a mound. A wide flat-bottomed ditch and a palisade bank, which was rebuilt in stone later in the 12th century, also surrounded it. It had a typical Norman arch and a wooden spiral staircase. It also featured turrets, which gave extra firing positions. However, it did not feature a ramp to the fore building, which was overlooked and fired on from the keep. The beginning of the thirteenth century was a very turbulent time as many civil wars were going on. Because of this, Castle owners felt they needed to step up on castle security. Outer curtain walls with rounded towers were built and the gatehouses and entrances of castles were made stronger. This was no exception at Kenilworth. The Clinton family lost the castle after a rebellion against King Henry in 1173 and passed it to King John who radically extended the castle and improved its defences as he was feeling threatened by his Barons. ...read more.

He also made an improvement to the exterior too by having a Hammer bean roof built which was later copied at Westminster Hall. John of Gaunt set out to make the castle bigger and better. He transformed it from your average medieval castle into an exquisite palace, fit for business and pleasure. One can argue the point that the great Kenilworth castle was both a typical medieval castle in general terms and an A.Typical in specific terms. Firstly, it did follow the typical pattern of castle development. Starting off life as a motte and bailey then improving to a square stone keep. Its defences and living conditions were also improved upon which most castles were. However, the scale of improvement in John of Gaunt's time was very rare, which is one of the reasons the castle could be described as A.Typical. Another is because the reason for building Kenilworth was very unusual. Thirdly, Kenilworth's defences were very different to most other castles of its time, for example, the mere played a significant role in the castles defences which was very significant. However, I believe Kenilworth was more typical than A.typical as most of the A.typical defences and improvements at Kenilworth were down to the mere for some reason or another. Still, however, the reason for building Kenilworth to deter Henry De Newburgh can only be described as A.Typical, although, this does not affect my decision for classing Kenilworth as a typical medieval castle. ...read more.