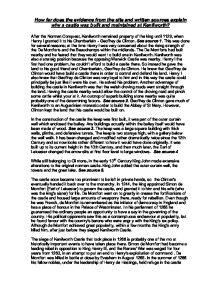 How far does the evidence from the site and written sources explain why a castle was built and maintained at Kenilworth?

How far does the evidence from the site and written sources explain why a castle was built and maintained at Kenilworth? After the Norman Conquest, Kenilworth remained property of the king until 1129, when Henry I granted it to his Chamberlain - Geoffrey de Clinton. See source 1. This was done for several reasons; at the time Henry I was very concerned about the rising strength of the De Montforts and the Beauchamps within the midlands. The De Montforts had built nearby and he feared that they would want to build one in Kenilworth. Kenilworth was also a strateig position because the opposing Warwick Castle was nearby. Henry I the first had one problem, he couldn't afford to build a castle there. So instead he gave the land to his good friend and Chamberlain, Geoffrey de Clinton. He knew that Geoffrey de Clinton would have build a castle there in order to control and defend his land. Henry I also knew that Geoffrey de Clinton was very loyal to him and in this way the castle could principally be just like it were his own. He solved his problem. Another advantage of building the castle in Kenilworth was that the welsh droving roads went straight through the land. Having the castle nearby would allow the control of the droving road and pinch some cattle whilst your at it. ...read more.

His political opponents saw this as a contemptuous endeavour at popularity, but he found favour with the country's barons who were angry with the King's tax policy. Although de Montfort achieved great popularity, within a few months the King's army killed him, after just before they sieged Kenilworth Castle. The siege of Kenilworth Castle that took place in 1266 is probably one of the most historically important events to have taken place there. Simon de Montfort had become a leading rebel in opposition to King Henry III, and the Barons' War was waged for four years from 1263, in an attempt to put an end to Henry's exploitation of command. De Montfort was killed in battle at close by Evesham in August 1265. In the summer of 1266 his fellow nobles, under the leadership of Henry de Hastings, held refuge in the castle when the King surrounded Kenilworth. The following siege of Kenilworth Castle in 1266 is the longest in English history, and confirmed the strength of the fortifications against siege machines like the Ballista brought in from London. Barges were even transported in from Chester in an attempt to enter the castle across the moat. In July 1266, the Archbishop of Canterbury stood before the castle walls and excommunicated the struggling followers of de Montfort. ...read more.

Masons were payed three shillings a day, this was a collosal wage considering that the avergae wage was a penny a day, if that. There were hundreds of masons working for weeks and months. He also constructed Leicester's Gatehouse as a grand entrance for Elizabeth I and had very elaborate and luxurious rooms (see source 9) , much like that which would've been in Leicester's Tower. Saying this it was still constructed with defensive features in mind. It had tall corner turrets, and could only be reached by crossing the moat. Any attackers could also be attacked from the roof. See source 10. Water displays were provided for her entertainment on the great lake that surrounded the castle, and the 'Pleasance' was set out on the North side of the castle as a pleasure garden during her visit. One particular account quotes how fireworks and guns were set off, trumpets played and torched blazed to welcome her, all of which could be heard more than twenty miles off. After Dudley's death, there was a dispute as to the legitimacy of ownership, and Kenilworth once more passed to the Crown. During the Civil War, Charles I withdrew his garrison and Parliament troops occupied the castle. The defensive capacity of the castle was destroyed shortly after 1656, with the Tiltyard being breached to empty the Mere, and the north wall of the Keep demolished. ...read more.