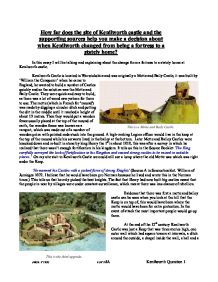 How far does the site of Kenilworth castle and the supporting sources help you make a decision about when Kenilworth changed from being a fortress to a stately home?

How far does the site of Kenilworth castle and the supporting sources help you make a decision about when Kenilworth changed from being a fortress to a stately home? In this essay I will be talking and explaining about the change from a fortress to a stately home at Kenilworth castle. Kenilworth Castle is located in Warwickshire and was originally a Motte and Baily Castle, it was built by 'William the Conqueror' when he came to England, he wanted to build a number of Castles quickly and so the solution was the Motte and Baily Castle. They were quick and easy to build, as there was a lot of wood everywhere for them to use. The motte (which is French for 'mound') was made by digging a circular ditch and putting the dirt in the middle until it reached a height of about 13 metres. Then they would put a wooden fence usually placed at the top of the mound of earth, the wooden fence was known as a rampart, which was made out of a number of wooden poles with pointed ends stuck into the ground. A high-ranking Legion officer would live in the keep at the top of the mound while his servants lived in the bailey at the bottom. ...read more.

There were also some small very well hidden doors in the outer wall that enebled one or two men to go out of the Castle in the presence of the enemy and they could swim across the lake and go and get help from somewhere else. The improved castle was still mainly based on defense and not on comfort, the windows were still arrow slits and the living conditions were not very good. The castle was still very much a fortress and was no where near becoming a stately home. The fourth son of King Edward III John of Gaunt now furter improved the castle just before the 1400's. He started to open up the windows to let more light in, he also built a massive palace overlooking the lake with big windows. The palace was a lot more comfortable than the rest of the castle. He also built a great hall, this had many uses. It was used for meetings, meals and (sometimes) sleeping. We can see this when we look at source E in the source booklet 'Here most people who lived in the castle slept, ate and spent most of their time.' (This was written by David Linsell in his book Castles 1066 to 1500) ...read more.

Queen didn't have to make a great detour all the way around the castle to get to the entrance as the new entrance was near the road. Plus the Tudor gardens were near the new entrance so it would be a pleasant entrance. The Earl of Leicester also improved on the stables, he made them more attractive by making the bottom part of the stable stone and the top part was wooden framed and the gaps between the wood was originally made out of laths and plaster but this was later replaced with brick in filling. I have gathered this information from the guidebook and from my own visit to Kenilworth. So in conclusion I used my sight visit and the Guide Book to help give me an idea about when Kenilworth Castle became a Stately home. Kenilworth Castle started off as a fortress and slowly over a long period of time turned into a stately home for the visit by Queen Elizabeth I. To begin with the Castle upgraded because the attacking weapons got better but then it started to become more comfortable and pleasant because the threat of attack became less, but the final thing that made Kenilworth Castle change was the visit in 1575 by Queen Elizabeth I. ?? ?? ?? ?? Jack Price 10PMA Kenilworth Question 1 ...read more.