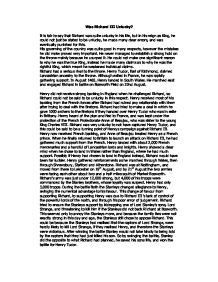 Was Richard III Unlucky? It is fair to say that Richard was quite unlucky in his life, but in his reign as King, he could not just be stated to be unlucky, he made many clear errors, and was eventually punished for this. His governing of the country was quite good in many respects, however the mistakes he did make proved very important. He never managed to establish a strong hold on the throne mainly because he usurped it. He could not make one significant reason to why he was the true King, instead he made many claims as to why he was the rightful King, which meant he weakened individual claims. Richard had a serious rival to the throne. Henry Tudor, Earl of Richmond, claimed Lancastrian ancestry to the throne. Although exiled in France, he was rapidly gathering support. In August 1485, Henry landed in South Wales. ...read more.

When he finally returned to Britain to launch an attack on Richard III, he had gathered much support from the French. Henry landed with about 2,000 French mercenaries and a handful of Lancastrian lords and knights. Henry showed a clear mind when he chose to land in Wales rather than England, where he had much support. Possibly if Henry had chosen to land in England instead, Richard would have been far luckier. Henry gathered reinforcements as he marched through Wales, then through Shrewsbury, Stafford and Atherstone. Richard was at Nottingham, and moved from there to Leicester on 19th August, and by 21st August the two armies were facing each other about two and a half miles south of Market Bosworth. Richard's army was just under 12,000 strong, but 4,000 of his troops were commanded by the Stanley brothers, whose loyalty was suspect. Henry had only 5,000 troops. During the battle Both the Stanleys changed allegiance to Henry, swinging the numerical advantage to his favour. ...read more.

The battle was fought on and around Ambion Hill, close to Sutton Cheney, and lasted only two hours. Richard had the better position, on the hill top, but made a huge error to lose this position and attack down the hill, rather than setup a strong defensive stance, and hold off any attacks from the smaller army. Polydore Vergil, English History (c.1530): "Richard, because he expected victory, received Henry with great courage... Henry's army... were now almost out of hope of victory, when William Stanley with three thousand men came to the rescue... Richard's army fled, and King Richard alone was killed fighting manfully in the thickest press of his enemies." Richard III had not fought in any battles before this time, he was far too rash at Bosworth and lost his life because of this. When he charged at Henry Tudors standard bearer, he did so out of anger, not out of strategic plan. Richard was cut down, and this triggered the other forces who supported Richard to flee. ...read more.