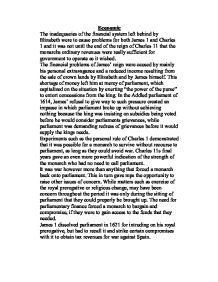 What problems did james 1 incounter?

Economic The inadequacies of the financial system left behind by Elizabeth were to cause problems for both James 1 and Charles 1 and it was not until the end of the reign of Charles 11 that the monarchs ordinary revenues were really sufficient for government to operate as it wished. The financial problems of James' reign were caused by mainly his personal extravagance and a reduced income resulting from the sale of crown lands by Elizabeth and by James himself. This shortage of money left him at mercy of parliament, which capitalized on the situation by exerting "the power of the purse" to extort concessions from the king. In the Addled parliament of 1614, James' refusal to give way to such pressure created an impasse in which parliament broke up without achieving nothing because the king was insisting on subsidies being voted before he would consider parliaments grievances, while parliament was demanding redress of grievances before it would supply the kings needs. Experiments such as the personal rule of Charles 1 demonstrated that it was possible for a monarch to survive without recourse to parliament, as long as they could avoid war. ...read more.

Political It was inevitable that parliamentary privileges would increase at the expense of the prerogative powers of the crown, and it is a tribute to James's political abilities that the concessions he was forced to make were not greater. The most significant involved parliament's establishment of the right to debate foreign policy its revival of the process of impeachment of royal ministers that had lapsed after 1450, and the passing of a monopolies Act that prevented the king from granting monopolies to anyone other than the inventors or importers of the new processes. While the monopolies Act of 1624 was the first instance of the royal prerogative being limited by an Act of Parliament, a more serious challenge to royal power occurred during the following year when parliament refused to vote tonnage and poundage to the new king Charles 1. This was a serious blow to his dignity as parliament had voted it to each new king for the duration of his reign since the late fifteenth centaury. Under the terms of the bill of rights of 1689, James 11 was declared to have abdicated and the throne was offered to William and Mary, who became joint sovereigns not so much by right of inheritance as by the choice of parliament. ...read more.

Monarchy had to clearly associate themselves with the protestant because fear of Catholicism would lead to many problems. James 1 soon found that he had to enlighten his views towards catholic subjects if he was to gain the co operation of parliament. Later in his reign, his failure to align himself evenly with protestant cause was to create great confusion and concern among his subjects. Charles 11 alliance with Louis x1v of France and his attempts at introducing religious toleration disturbed many, doing much to create a climate in which an exclusion crisis was able to develop. The brevity of James 11 reign is in itself a testimony to the depth of anti catholic sentiment among hi subjects, as is their acceptance of his replacement on the throne by William of Orange. From Charles 11 reign on they could no longer claim to be a spiritual as well as the political leader of all his subjects. It was impossible to forget the horrors of the civil war or the execution of the king, both of which must have reminded the king and parliament of their advantages of settling their differences. ...read more.