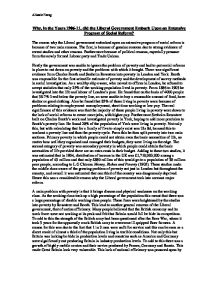 Why, in the Years 1906-11, did the Liberal Government Embark Upon an Extensive Program of Social Reform?

Why, in the Years 1906-11, did the Liberal Government Embark Upon an Extensive Program of Social Reform? The reason why the Liberal government embarked upon an extensive program of social reform is because of two main reasons. The first, is because of genuine concern due to strong evidence of recent studies and other reasons. Furthermore because of political reasons, especially pressure from the newly formed Labour party and Trade Unions. Firstly the government was unable to ignore the problem of poverty and had to put social reforms in place to cut down on poverty and the problems with which it bought. There was significant evidence from Charles Booth and Seebolm Rowntree into poverty in London and York. Booth was responsible for the first scientific estimate of poverty and the development of survey methods in social investigation. As a wealthy ship owner, who moved to offices in London, he refused to accept statistics that only 25% of the working population lived in poverty. From 1886 to 1903 he investigated into the life and labour of London's poor. He found that on the basis of 4000 people that 30.7% lived below the poverty line, so were unable to buy a reasonable amount of food, have shelter or good clothing. Also he found that 85% of those living in poverty were because of problems relating to employment: unemployment, short-time working or low pay. ...read more.

This forced Liberal government to embark upon a programme of social reform to cut poverty and thus improve national efficiency. The second problem that poverty brings is that the people in poverty have no freedom, and this can be a reason why there was such a low national efficiency. If the government isn't allowing you freedom then why should you go fight for your country? Even if this is the only way to get work, which in many cases it would have been, then there would be no passion, no heart when fighting out on the front line. If they are constantly constrained by poverty and the constant rejection by the government there will be no nationalism and so may be the reason for the lull in national efficiency. Poverty was seen as an obstacle to basic freedom, and that not being free to enjoy life is not giving someone his or her rights. It was not only poverty that affected the social reforms from 1906-11. The Liberal government came under immense pressure, especially from the rise of the newly formed Labour party. The lib-lab pact, which was initially used to defeat the conservatives in as many constituencies as possible, had in fact allowed Labour to gain 29 labour MPs in Parliament. As Lloyd George explains in Source 2, of our handouts, "We have a great Labour Party sprung up. ...read more.

Lloyd George and Winston Churchill soon became leading exponents of New Liberalism. This new change at the top lead to strong ideas being carried out on new liberalism and of course one of these views was increased intervention by the government, and the way that this came about was through social reforms. In conclusion the new awareness of poverty within the country from the studies of Charles Booth and Seebolm Rowntree lead to the Liberal Government being forced into making social reform. The affects of making social reforms on poverty, is that the country as a whole will become healthier, this will in turn lead to stronger soldiers and workers leading to a higher national efficiency cancelling out many of the problems that put great pressure on the Liberal government for reform. Not only this but with the rise of Labour, helped by the lib-lab pact meant unless the Liberal party changed its ideas and make some manager reforms then it could be completely "wiped out". With this and the high percentage of working class people supporting the large and powerful Trade Unions, which wanted changed it meant that the Liberal Government could not resist change. The changes within the party, especially the towards the top with Lloyd George and Winston Churchill, who, Churchill especially, was keen to prove his Liberal credentials it was almost certain for Liberals to bring about change. With all these reasons taken into account this is why the Liberal government embarked upon an extensive program of social reform. Alistair Ferag ...read more.