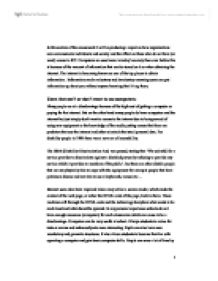 how organisations now communicate individuals and society and the affect on those who do not have (or want) access to ICT.

In this section of the coursework I will be producing a report on how organisations now communicate individuals and society and the affect on those who do not have (or want) access to ICT. Computers are used more in today's society then ever before this is because of the amount of information that can be stored on it or when obtaining the internet. The internet is becoming known as one of the top places to obtain information. Information can be voluntary and involuntary meaning users can put information up about you without anyone knowing that it's up there. Users that can't or don't want to use computers: Many people are at a disadvantage because of the high cost of getting a computer or paying for the internet. But on the other hand many people do have computers and the internet but just simply don't want to access to the internet due to being scared of using new equipment or the knowledge of the media putting across that there are predators that use the internet and other criminals that steal personal data. ...read more.

In my personal experience schools do not have enough resources (computers) for each classrooms which can cause to be a disadvantage. Computers can be very useful at school. It helps students to revise for tests or exams and makes subjects more interesting. Pupils can also learn new vocabulary and gramatic structures. It also allows students to become familiar with operating a computer and gain basic computer skills. People can save a lot of time by using a computer. This is especially beneficial in the workplace where employees can do their work faster than they could in the past. Religion is another aspect in which people don't use computers or want access to the internet. They consider it as the work of the 'devil' which can be another reason why society don't want access to ICT. There are certain cons and dangers relating to the use of Internet that can be summarised as: * Personal Information: If you use the Internet, your personal information such as your name, address, etc. ...read more.

President Barack Obama is the first leading government men to use their phone for emails. He's campaign was mainly online having speeches and videos and products and other sources of information in order to get voters on his side. Many businesses and organisations are using emails to communicate with individuals or even using mail merge which can customize your own letter to send it. Many people use the internet to shop online. Shopping online is one of the biggest things on the internet that people do. Many shops only have online stores because it is one of the biggest ways to buy products. In recent years the internet is adapting to new technology which copes with disable users. The BBC is one website which has certain aspects which handles people with disability. In this report I have shown the disadvantages and the advantages of using ICT. Though there are a lot of Disadvantages when using ICT and the internet, more and more users are using the internet and computers everyday. ?? ?? ?? ?? 1 ...read more.