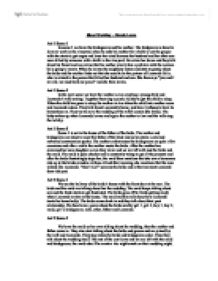 Blood Wedding - Garcia Lorca Act 1 Scene 1 In scene 1 we have the bridegroom and his mother. The bridgroom is about to leave to work in the vineyard, when he asks his mother for a knife to cut the grapes with she starts to get angry and loses her mind because her husband and her other son were killed by someone with a knife in the vineyard. He calms her down and they talk about his fianc� and we realise that his mother clearly has a problem with the woman he is going to marry. When he leaves the neighbour enters and stats to gossip about the bride and the mother finds out that she used to be the partner of Leonardo Felix, who is related to the person that killed her husband and son. ...read more.

The mother embarrasses the bridegroom on quite a few occasions and after a while the mother meets the bride. After the mother has examined her new daughter-in-law they leave and we are left with just the bride and the maid. The maid is quite cheeky and is constantly trying to get at the presents and after the bride frustratingly stops her, the maid then mentions that she saw a horseman ride up to the brides window at three o'clock that morning, she mentions that the man looked like Leonardo. "Don't Lie!" screams the bride and at that moment Leonardo does ride past. Act 2 Scene 1 We see the hallway of the bride's house with the front door at the rear. The bride and the maid are talking about her the wedding. ...read more.

well whetted by then." A young enters and the bridegroom to join the family for a drink. Act 3 Scene 1 Situated deep in a forest at night, whilst two violins are heard, three woodcutters appear. We see the ride and Leonardo sneaking through the forest because they have just ran away from the wedding together. The bride talks about her and Leonardo splitting up and meeting later on when they have evaded the angry crowd who are looking for them. Act 3 Scene 2 Three girls sing a song announcing that nobody has returned from the wedding, and that Leonardo and the Bridegroom are both dead. On one side being guilt and shame, and on the other being their uncontrollable love for one another. The dead bodies are brought home, and the neighbours are left kneeling and weeping as the curtain falls. ...read more.