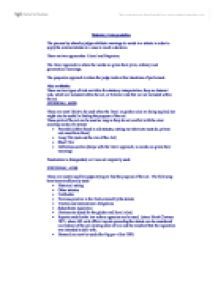 Statutory Interpretation The process by whereby judges attribute meanings to words in a statute in order to apply the relevant statute to a case to reach a decision. There are two approaches: Literal and Purposive. The literal approach is where the words are given their plain, ordinary and grammatical meanings. The purposive approach is when the judge looks at the intentions of parliament. Aids available: There are two types of aids available for statutory interpretation, they are Internal aids, which are included within the act, or External aids that are not included within the act. INTERNAL AIDS These are most likely to be used when the literal or golden rules are being applied, but might also be useful in finding the purpose of the act. These parts of the act can be used so long as they do not conflict with the clear enacting words of a statute: * Preamble (often found in old statutes, setting out what acts must do; private acts must have them) * Long Title (sets out the aim of the Act) * Short Title * Definitions section (helps with the literal approach, as words are given their meaning) Punctuation is disregarded, as it was not originally used. EXTERNAL AIDS These are mostly used by judges trying to find the purpose of the act. The following have been traditionally used: * Historical setting * Other statutes * Textbooks * Previous practice in the field covered by the statute * Treaties and international obligations * Subordinate legislation * Dictionaries (used for the golden and literal rules) ...read more.

* Town Causes Act 1847 * Two police officers were sent to 'stake out' the toilet the offender, after they had been receiving complaints about the behaviour of a man in a public toilet. * They saw Cheeseman indecently expose himself to them. * The extended meaning of the word street included the public toilet. * However the defendant was found not guilty, because the policemen did not fit into the definition of a passenger as they were not 'a passer by or through; a traveller (usually on foot); a wayfarer' ABSURD RESULT Golden rule Lord Wensleydale defined the golden rule in Greg v Pearson (1857) as a sensible view of matters. The golden rule is used to prevent an injustice or absurd result, or when the court has to choose one of two words. Advantages Avoids absurd results Disadvantages That it is not as broad as the mischief rule. CASES Re: Sigsworth (1935) * Son murders his mother * It is discovered that the mother has left no will * Normally it would go to the next of kin, which in this case would be the son * Court was not going to let a murderer inherit the estate of the person they have killed * Court effectively wrote that the 'issue' would not be entitled to inherit where they had killed the deceased R v Allen (1872) ...read more.

was done by nurses without doctor's supervision * H/L said it was lawful because of the mischief rule Elliot v Grey 1960 * Road traffic act 1930 meant it was illegal for an 'uninsured car to be used on the road' * Fact was that there was a jacked up car with no battery on the road * Found guilty because the intention of parliament was for people to use insured cars Rules of language Ejusdem Generis - general words which follow specific words are taken to include only things of the same kind. Powell v Kempton Park Racecourse (1899) Expressio unius exclusio alterius - the express mention of one thing, excludes others. Eg, No dogs allowed on the train, could mean that donkeys are allowed Noscitur a sociis - a word is known by the company it keeps Presumptions 1. Mens rea - no one can be convicted unless they have a blameworthy state of mind 2. Statutes don't change common law 3. Crown is not bound by any statute 4. Legislation does not apply retrospectively 5. It applies generally through the UK 6. International obligations wont be breached 7. Laws creating crimes should be interpreted in the favour of the citizen 8. Nothing is removed from the courts jurisdiction 9. Existing rights are not interfered with 10. If property rights are interfered with, the victim will be compensated European Legislation The purposive rule is more applicable in Europe because European Legislation is drafted more on purpose. ...read more.