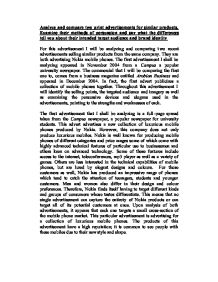 Analyze and compare two print advertisements for similar products. Examine their methods of persuasion and say what the differences tell you about their intended target audience and brand identity

Analyze and compare two print advertisements for similar products. Examine their methods of persuasion and say what the differences tell you about their intended target audience and brand identity For this advertisement I will be analyzing and comparing two recent advertisements selling similar products from the same company. They are both advertising Nokia mobile phones. The first advertisement I shall be analyzing appeared in November 2004 from a Campus a popular university newspaper. The commercial that I will be comparing the first one to, comes from a business magazine entitled Arabian Business and appeared in December 2004. In fact, the first advert publicizes a collection of mobile phones together. Throughout this advertisement I will identify the selling points, the targeted audience and imagery as well as examining the persuasive devices and slogans used in the advertisements, pointing to the strengths and weaknesses of each. The first advertisement that I shall be analyzing is a full-page spread taken from the Campus newspaper, a popular newspaper for university students. This advert advertises a new collection of luxurious mobile phones produced by Nokia. However, this company does not only produce luxurious mobiles. Nokia is well known for producing mobile phones of different categories and price ranges some of which come with highly advanced technical features of particular use to businessmen and others keen on advanced technology. Some of these features include access to the internet, teleconferences, mp3 player as well as a variety of games. Others are less interested in the technical capabilities of mobile phones, but are lured by elegant designs and colours. ...read more.

That is exactly what a woman likes to be. Even though it is not clear, this sentence contains a lot of selling points. 'Daring facets of imagination and leading edge technologies,' suggests that the mobile phones haves new daring designs that have never been seen before and their technology is at the limit. In the rest of that sentence it also says that the rich colours are delicately mixed and matched and the material of the mobile phone is modern. The use of the imperative is used a second time after the long sentences and tells the reader to 'Enjoy a little spontaneity during the day or dwelve into the mystique of hidden secrets at night. 'A lot of over-exaggeration is used; how would a mobile phone help you in being spontaneous and even more how would it help a woman dwelving in the 'mystique hidden secrets at night?' However saying that the mobile phone is 'mystique,' at night then it is very similar to a young woman, who is also 'mystique,' at night sometimes. A last imperative is used again but this one, compliments the one that has the mobile phones because the user can 'Stay ahead of the latest trends or simply set them yourself.' This makes it sound you are playing a big role if you have the mobile phone and you can choose to follow its example of fashion or to lead fashion yourself. This statement makes the reader impressed. Even though the message of the text is very oblique and indirect, a lot of information is passed on to the reader. ...read more.

The text starts with a question asking the reader ' Out to lunch?' The text answers the question itself saying that the 'Nokia communicator 9500 makes sure you're not out of the loop.' This means that having the mobile will help you keep in touch with your job even while eating or waiting. After this, all the other sentences are imperatives giving the features and selling of the mobile phone. On the other mobile you can ' Create, edit or view documents, spreadsheets and even presentations while on the go with the built in application, the e-mail as attachments. Read and write e-mails over a coffee, either online or offline, or send and receive faxes through you GSM number. Surf the internet, update data and download files from your office server efficiently via WLAN at a hotspot such as a caf�.' We realize that the selling points and features of the product are all bunched together in a few sentences, because the reader; a businessman; of the advert would not have time to try and understand an oblique message, so all the information is clear and direct. In case the reader does not have time to read the text then, next to it is a series of logos representing the features of the mobile phone. This is very effective because, this is what a reader would naturally do if he doesn't have time. Under the text, the advertisement reminds the reader that if he wants more information then he may go to Nokia's official website. However, the website is in very small font and does not attract the reader's attention, unlike the first advert, where the website is in bold. ...read more.