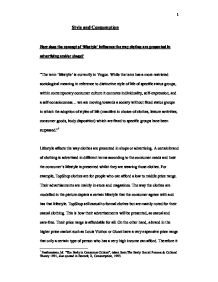 How does the concept of 'lifestyle' influence the way clothes are presented in advertising and/or shops?

Style and Consumption How does the concept of 'lifestyle' influence the way clothes are presented in advertising and/or shops? "The term 'lifestyle' is currently in Vogue. While the term has a more restricted sociological meaning in reference to distinctive style of life of specific status groups, within contemporary consumer culture it connotes individuality, self-expression, and a self-consciousness... we are moving towards a society without fixed status groups in which the adoption of styles of life (manifest in choice of clothes, leisure activities, consumer goods, body disposition) which are fixed to specific groups have been surpassed."1 Lifestyle affects the way clothes are presented in shops or advertising. A certain brand of clothing is advertised in different terms according to the consumer needs and how the consumer's lifestyle is presented whilst they are wearing those clothes. For example, TopShop clothes are for people who can afford a low to middle price range. Their advertisements are mainly in-store and magazines. The way the clothes are modelled in the picture depicts a certain lifestyle that the consumer agrees with and has that lifestyle. TopShop sell casual to formal clothes but are mainly noted for their casual clothing. This is how their advertisements will be presented, as casual and care-free. Their price range is affordable for all. On the other hand, a brand in the higher price market such as Louis Vuitton or Gucci have a very expensive price range that only a certain type of person who has a very high income can afford. Therefore it becomes an item associated with upper-class people as they are the social status group that can afford this. ...read more.

In 1984 Toscani initiated the 'United Colors of Benetton' slogan, allowing the brand to be inclusive of ethnic, cultural and other diversity. Benetton adverts do not always model their clothes. The most successful campaigns causing an outcry of media and public attention have been of people dying and of the new born. This image is from a 1998 Benetton advertising campaign featuring children with Downs Syndrome. The message is that their distinctive appearance is counter to typical ideals of beauty and half formulised by the fashion industry. By commenting on conventional truths contained within branded messages and questioning our preconceptions, the brand appeals to the discernment and intelligence of the consumer. Figure 2. Benetton Sunflowers Campaign, Autumn/Winter 1998. (c) O.Toscani/Benetton. Sports brand are associated with a particular lifestyle of sporting activities/however this is not always so as brands such as Adidas and Nike have become more of fashion items than a commodity for sporting activities. This is a prime example of how the lifestyle of a certain group of individuals who prefer sports cloths that casual everyday wear clothes. For example, jogging trousers may not be used for jogging. Style plays a conspicuous role in our modern society which there is three general arenas: 1. Style is a critical factor defining one self. As one interacts with other people -intimates and stranger alike- style is a way of stating who one is: politically, sexually, in terms of status and class. Style is an instrument of conformity, or of opposition. Style conveys mood. We are judged and judge people by style. ...read more.

Self-assured. Well-balanced and able to see many sides of an issue. Figure 3. The characteristics of lifestyle groups7 "The basis on which good repute in any highly organised industrial community ultimately rests in pecuniary strength: and the means of showing pecuniary strength, and so of gaining or retaining a good name, are leisure and a conspicuous consumption of goods."8 Advertising is a strong medium used to promote products. Particularly the way clothes and shops are represented through advertising emulate a concept of lifestyle through characteristics in advertising. These characteristics include brand image, identity, market segmentation and consumption of style. Each individual person has a different lifestyle. They choose clothing products according to their lifestyle. Advertisements are aimed at a particular lifestyle, be it for casual ware, formal wear or to differentiate the different social groups of which have been discussed. 1 Featherstone, M. "The Body in Consumer Culture", taken from The Body: Social Process & Cultural Theory 1991, also quoted in Bocock, R, Consumption, 1993. 2 Willams, Gareth. Branded? Products and their personalities. 2000. P. 7. 3 Tomlinson, Alan. Consumption, Identity and Style. 1990. P. 43. 4 The interview comes from the oral history research reported in All Consuming Images: the Politics of Style in Contemporary Culture, New York: Basic Books, 1988. Quoted in Tomlinson, A. Consumption, Identity and Style. P. 51. 5 Williamson Judith. Decoding Advertisements. Ideology and Meaning in Advertising. P. 13. 6 Williamson, Judith. Decoding Advertisements. Ideology and Meaning in Advertising. P. 17. 7 Source: Adapted from values and Lifestyles of Americans, SRI International, 1983. Taken from Success in marketing and Market Segmentation handout. P. 78-79. 8 Thorstein Veblen, The Theory of the Leisure Class (1899), Mentor, 1953, p. 70). Taken from Tomlinson, Alan, Consumption, Identity and Style. P. 1. 1 ...read more.