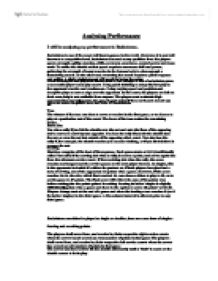 Analysing my performance in Badminton.

Analysing Performance I will be analysing my performance in Badminton. Badminton is one of the most well known games in the world. However, it is not well known at a competitive level, badminton demands many qualities from the player: speed, strength, agility, stamina, skills, accuracy, smartness, mental power and team work. To strike the shuttle at that speed requires enormous skill and power, gathering the strength of many muscles in the human body to choreograph a thundering smash. At the other end, returning the smash requires quick response and agility. A slight misjudgement will result in losing the point. Great techniques and physical fitness alone is not enough to win a badminton game, a successful player must play smart. Using quick thinking to adapt his/her play to the opponent's tactics and weaknesses. Using varying speed and position and deceptive plays to earn a edge over the opponent. In the court, the players are left on their own; help is not available from anyone. The player must maintain high concentration and will power; the game hasn't ended if the scoreboard doesn't say 15. Here are some simplified laws and rules of Badminton: Toss The winner of the toss can elect to serve or receive in the first game, or to choose to play at a particular end of the court. The loser of the toss makes the remaining choice. Basic Aim You win a rally if you hit the shuttle over the net and onto the floor of the opposing side's court see court layouts opposite. You lose the rally if you hit the shuttle into the net, or over the net but outside of the opposing side's court. You also lose the rally if, for example, the shuttle touches you or your clothing, or if you hit it before it crosses the net. Scoring Matches comprise of the best of three games. Each game starts at 0-0 (traditionally called "love-all") ...read more.

~Take up a sideways stance, twist your shoulders as you prepare to hit the shuttle. ~Use a forehand or multipurpose grip ~The action must be a whipping action with a flat racket for power. ~Follow through along the line of the shuttle.. Tactical aspects. This shot is good at any time during the game and is often very affective, is mainly used though when the players have given space for the shuttle to land and when they are least expecting it, also often it should be used during a rally and hit it out of the blue. This shot is ATTACKING. Self-evaluation! I found this one of the hardest at first and couldn't get to grips with the straight arm and the sideways stance I kept bending my arm and the shot therefore wasn't as powerful as it should have been, but with practise it started to grow on me and I then began to improve my faults. Then once I had learnt it properly it was working and my opposition were not able to return my smash. My general strengths are: * The serve is a strong point in my game and this helps allot as it's the start of every game. My preparation is very good with correct positioning of the feet and grip. The low serve is my strongest point in the service, this is mainly because my shot positioning is at quite a high standard, this is due to me having good feet positioning allot of balance and my hand eye co-ordination is at a high standard this giving me good timing. The follow through is a very important part of the serve and I carry out. My serve is quite effective. * My net play is also another strong point to my game. I find my grip very natural and comfortable. My vision of the game is quite good and I always manage to prepare for the oncoming shot and I always retreat back to the centre after taking ...read more.

Week 3 In this week I had a 10 second shorter rest period it was 1 minute and 10 seconds of resting time now. It got tougher but due to the previous weeks training my muscles had got used to it, so I wasn't a strain. Week 4 Here everything was the same as week 3 but the repetition had increased to 3 reps instead of 2. This made every single station tougher especially station 2. After I finished the circuit, I went and played a game of badminton. I noticed that I could hit the shuttle cock with a lot more power now, and my agility was better since I got move around faster within the court, thanks to in part of station 1. Week 5 In this week the amount of time I spend at each station had increased by 10 seconds to make it 50 seconds in total. This made station 2 really tough and I just completed, had it not been for the previous training I would have not completed. This is a sign that my fitness has improved. However it was hard to recover and remove oxygen debt in the 1 minute and 10 seconds I had to do so, but I managed and moved onto station 3. Week 6 This would be the toughest week of all with the repetition, time spent on each station at its highest, and recovery time at its lowest. I had to push myself really hard to get through all the stations and their repetitions. It was hard to cope with another 10 seconds being cut off the recovery period, bringing it down to 1 minute. This time all the stations where hard but I managed to get through them. I have noticed a considerable improvement in my fitness due to the circuit training, however for it to continue it would need to get harder every week and I would need to continue doing the training every week. ?? ?? ?? ?? ...read more.