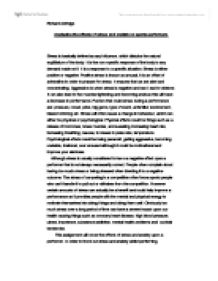 Analysing the effects of stress and anxiety on sports performers Stress is basically defined as any influence, which disturbs the natural equilibrium of the body. It is

Analysing the effects of stress and anxiety on sports performers Stress is basically defined as any influence, which disturbs the natural equilibrium of the body. It is the non-specific response of the body to any demand made on it. It is a response to a specific situation. Stress is either positive or negative. Positive stress is known as arousal, it is an offset of adrenaline in order to prepare for stress. It ensures that we are alert and concentrating. Aggression is when stress is negative and can lead to violence. It can also lead to the muscles tightening and becoming anxious this will have a decrease in performance. Factors that could stress during a performance are: pressure, crowd, prize, big game, type of event, unfamiliar environment, biased referring etc. Stress will often cause a change in behaviour, which can either be physical or psychological. Physical effects could be things such as a release of hormones, tense muscles, and sweating, increasing heart rate, increasing breathing, nausea, increase in pulse rate, temperature. Psychological effects could be being paranoid, getting aggressive, becoming unstable, irrational, over aroused although it could be motivational and improve your alertness. ...read more.

Stress, arousal and anxiety can have many effects upon a performer both positive and negative. Arousal can be defined as being a general mixture of both the physiological and psychological levels of activity that a performer experiences. Highly energised states can be caused by an individual or team competing in an important competition. Arousal is not seen as good or bad, it appears to represent the level of energy or effort that a learner/performer develops and applies to a sporting situation. Arousal is a state of readiness to perform that helps motivate individuals. Whereas anxiety is a negative reaction of a performer to stress, this often leading to over arousal (worry and nervousness). It is when a player becomes over aroused that their performance can start to deteriorate. For example in football when players such as Roy Keane or Duncan Ferguson become over aroused more often than not they will end up being sent off for aggressive and violent behaviour. Anxiety is linked to the negative emotions a person experiences as a result of the cognitive and physiological effects of arousal and also stress. ...read more.

After a muscle is tensed the relaxation effect is deepened which also has an effect upon involuntary muscles. This can be practised using a series of taped instruction or by the psychologist giving out the instruction. It usually starts at the hands by making a clenched fist gesture then relaxing ad would carry on through the arms and so on. Meditation is frequently confused with various forms of concentration. The purpose of concentration exercises is to focus full undivided attention on a specific aspect of functioning of our mind and/or the body in order to accomplish a certain goal or develop a certain skill. Exercises such as yoga, tai-chi, breathing exercises, visualization are all forms of concentration. In contrast, meditation is an exercise, aiming to prevent thoughts in a natural way, by deeply relaxing the physical body and then trying to keep the mind completely "blank" with no thoughts whatsoever. This state may be maintained for a few seconds or a few hours, depending on your skill. Meditation could be used to relax before a game if you were nervous. It could be used to reach the optimum if a player was excessively nervous before a game. ?? ?? ?? ?? Richard Aldridge ...read more.