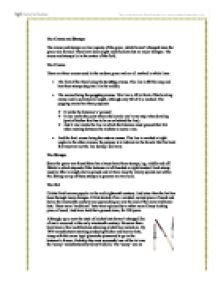 The Crease and Stumps The crease and stumps are two aspects of the game, which haven't changed since the game was formed. There have been slight modifications but no major changes. The crease and stumps lie in the centre of the field. The Crease There are three creases used in the modern game and are all marked in white lines: * The first of the three being the bowling crease. This line is 8ft 8in long and has three stumps dug into it in the middle. * The second being the popping crease. This line is 4ft in front of the bowling crease and is unlimited in length, although only 6ft of it is marked. The popping crease has three purposes: > It marks the batsman's 'ground', > It also marks the point where the bowler can't over step when bowling (part of his/her foot has to be on or behind the line). > And it also marks the line in which the batsmen must ground their bat when running between the wickets to score a run. * And the final crease being the return crease. This line is marked at right angles to the other creases. Its purpose is to indicate to the bowler that his back foot must not cut the line during a delivery. The Stumps Since the game was found there has always been three stumps, leg, middle and off. Which is which depends if the batsman is left-handed or right-handed. Each stump must be 28in in length above ground and all three must be evenly spaced out within 9in. Sitting on top of these stumps in grooves are two bails. The Bat Cricket first became popular in the mid-eighteenth century. And since then the bat has been through many changes. It first started of as a wielded, curved piece of wood and but as the nineteenth century was approaching so was the end of the more traditional bats. ...read more.

> The 'Arm Ball' Most of the time it depends on the pitch for a spinner to decide, which delivery to use. If the pitch has a good grass covering or a glassy sheen, then using the off-break could be very expensive as it wont necessarily spin, only marginally deviate. In these conditions the 'arm ball' becomes very helpful if bowled right. However, the 'arm ball' doesn't turn. Its not meant to. The ball is supposed to be floated of the first finger, with the seam-facing upright and with no spin imparted. This ball is used as the final ball when setting up the batsman, as the ball will go straight on when the batsman thinks its an off-break and will play for the turn. But if the ball has still got plenty of shine then the ball might actually swing away. This ball is also called the 'drifter', but is now more often called the 'dusara' by India's latest spin maestro, Harabhajan Singh. > The 'Mystery Ball' The 'Mystery Ball' hasn't been here for long and isn't a ball, which many know how to bowl. It was developed by Pakistan's, Saqlain Mushtaq, and others such as Muttiah Muralitharan and Harbhajan Singh have also learnt how to bowl it. The brilliant thing about this ball is that it is bowled with an off-break action and release, but actually spins the other way. The difference the batsmen fail to realise between the two deliveries is that the Mystery Ball' is that it is bowled from the top of the hand rather than the front and also extra invert is put into the wrist. > Leg-Spin This probably the most exciting and devastating type of spin. Unlike off-spin and left-arm spin being called 'finger spin' because it uses the fingers to turn the ball, leg-spin turns the ball using its wrist. Sop therefore it is called 'wrist spin'. ...read more.

This would control the shot. Please note the ball should be played under your eye line and you shouldn't push out for the ball as it could result in an edge going into the slip cordons. My Cricketing Ideal Most people would think me being an Indian my favourite cricketer would be the no1 ranked master-blaster in the world, Sachin Tendulkar. But this is not at all true. But I have to confess my ideal is still an Indian and has been the most consistent batsman during the series between England and India, here in England, with an average of 77. Rahul Dravid in my opinion is the best timer of the ball anywhere else in the world. What makes him a great batsman to watch is that he spends a very long time out in the middle waiting for the bad ball to punish? He hasn't really got a weakness like other batsman because anything over pitched on the off-side goes for four n anything played on the pads goes for four. Rahul Dravid is mainly a front foot player and during this summer's clash with England, England tried to exploit this area by bowling outside his off-stump and luring him into the shot to take the edge to the slips. But out of his six innings they were only successful once, which shows how god his temperament is and that he fights hard for the team. Not only is he a great batsman he is also one of the best first slips in the world. But in his cricketing career he has also kept wicket for the national side and is more and more nowadays in the limited overs game. Talking about the limited overs games Rahul Dravid is not a batsman who can only make slow runs in an unlimited overs game, but can also make match-winning runs in quick time. This was well presented with an array of centuries in the last world cup in England in 1999 where he got top-batsman of the cup and also top-batsman of the year. . ...read more.