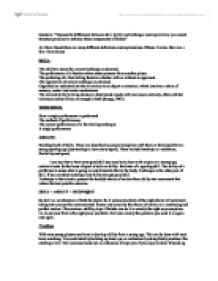 &quot;Discuss the differences between skill, ability and technique and explain how you would structure practices to enhance these components of fitness&quot;

Question- "Discuss the differences between skill, ability and technique and explain how you would structure practices to enhance these components of fitness" As I have found there are many different definitions and explanations of these 3 terms. Here are a few I have found. SKILL- The ability to select the correct technique on demand. The performance of a function when under pressure from another player. The perfecting of a foot-balling function whether with or without an opponent. The application of correct technique on demand. Organised co-ordinated activity in relation to an object or situation, which involves a chain of sensory, central and motor mechanisms. The learned ability to bring about pre-determined results with maximum certainty, often with the minimum outlay of time or energy or both (Knapp, 1963) TECHNIQUE- How a single performance is performed The method of performance The correct performance of a foot-balling technique A single performance ABILITY- Building block of skills. These are described as people being born with them or developed from a young sporting age (just starting to learn about sport). ...read more.

This increases movement and awareness. It also helps if you like to play racket games because it isn't a lot different if you have to do the same thing but hit the ball/shuttlecock back with a racket. If you have to move it helps balance as well because this you not only have to move but you have to stay on your feet so you can throw or hit the ball back quickly. If you want to increase technique you do a more specific practise for the sport you need the 'skill' for. If you take football for example. You can become proficient at passing and control by constantly practising it. You start opposite each other and using just one foot you pass the ball straight to the player opposite. They control it with one touch and pass it back. As you increase in the 'ability' to do this you can increase the speed in which you pass the ball. Then as you become proficient at this you start to put bounce on the ball, which makes it harder to control. ...read more.

bowled at you, with a coach telling you how to return it with the right technique then you become proficient at doing the shot. As you become more proficient at the shot you canvary the position you return the ball to. This increases technique of the specified shot and also increases reaction time and preperation for the shot. I.e getting the bat in the right place to return the ball. These all improve becaused you have been in the situation lots of times before. Analyse and Evaluation Overall 'SKILL' is made up of abilities built at an early sporting age and techniques which come from regally practising the same things over and over until you are proficient at them and can produce the practised techniques in a game. This is why you get the equation of skill Skill = Technique + Ability. Skill can be taught but you have to build on abilities learnt from an early age. There are practises available to enhance the separate components of technique and ability. These include structured games, specific technique practises (i.e. passing), specific ability practises (i.e. catching a ball to improve hand eye co-ordination.) and pre-set pressure practises to improve the skill under pressure. ...read more.