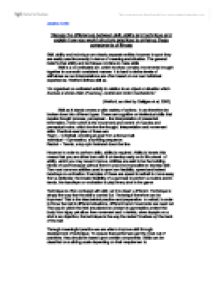 Discuss the differences between skill, ability and technique and explain how you would structure practices to enhance these components of fitness Skill, ability and technique are clearly separate entities however in sport they are easily used incorrectly in terms of meaning and situation. The general belief is that ability and technique combine to make skills. Skill is a co-ordinated act, which involves complex movements brought together in a smooth consistent manner. It is hard to define levels of skilfulness as our interpretations are often based on our own individual experiences. Welford defines skill as, 'An organised co-ordinated activity in relation to an object or situation which involves a whole chain of sensory, central and motor mechanisms.' (Welford; as cited by Galligan et al, 2000) Skill as it stands covers a wide variety of actions. It can therefore be broken down into different types. These are cognitive or intellectual skills that require thought process, perceptual - the interpretation of presented information, motor which is the movement and control of muscles and perceptual motor, which involve the thought, interpretation and movement skills. Practical examples of these are: Team - In Netball, shooting at goal from a thrown ball. Individual - Gymnastics, a tumbling sequence. Racket - Tennis, a top spin forehand down the line. However in order to perform skills, ability is required. ...read more.

For individual sports the types of practices used are different again. In gymnastics for example, the skills involved are: - * Closed - there are no external factors effecting the skill. * Self-paced - the timing in which the skill is performed is the choice of the performer. * Discrete - the skills have a clear beginning and end. * Individual - the actions of others are not relevant to the skill being performed. I.e. a gymnast will perform their routine and then leave the floor as a new competitor performs their routine. Most skills cannot be neatly labelled or classified and so they are put on a continuum. Knapp recognised two basic classifications of skills. She discovered skills could fit on this continuum between open and closed. As described before, open skills such as football and netball are those directly influenced by the environment in which they are performed. Therefore, skills are predominantly perceptual and on this open-closed continuum they fall at 10. (See below). Closed skills (those that have no outside physical influence acting upon them and are in a predictable environment) fall at 0 on the scale and then depending on the degree to which outside factors influence the performance of a skill will determine where on the continuum they lie. ...read more.

Racket sports are considered quite specific. They tend to include serial skills. For example in a rally, each individual shot is a skill but together, each players shots makes up a rally, which in itself is a skill. Therefore a mixture of practices, both variable and fixed, are required for racket sports. If I was to structure three practices it would look something like below. Firstly the performer would carry out a self-paced skill by controlling the timing of the shot and importantly the feed. The second practice would now include a target on the opposite side of the net. It is still a fixed practice however, because the feeder is still present feeding the b***s directly to the performer. Lastly the shot has to be externally paced, the feeder is now no longer under the control of the performer. The ball should now be coming to the performer at varied speeds and heights. These practices will also help to build up levels of fitness, as the feeder will challenge the performer to their maximum. Ability, in theory, is innate; this is because it does have a restricting effect on the skill level of many performers. The abilities mentioned, i.e. flexibility and speed may be enhanced by the use of weight and power training. This is also an excellent practice in which to improve levels of fitness, as strength and endurance are intensified, leading an athlete to cope with more sustained and complex practices. Jessica Cobb ...read more.