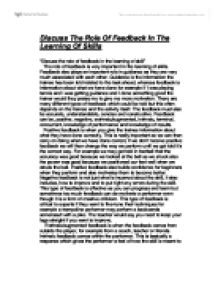 Discuss The Role Of Feedback In The Learning Of Skills "Discuss the role of feedback in the learning of skill" The role of feedback is very important in the learning of skills. Feedback also plays an important role in guidance as they are very much associated with each other. Guidance is the information the trainee has been told related to the task ahead, whereas feedback is information about what we have done for example if I was playing tennis and I was getting guidance and I done something good the trainer would they praise me to give me more motivation. There are many different types of feedback which could be told but this often depends on the trainee and the activity itself. ...read more.

Negative feedback is not just what is incorrect about the skill, it also includes, how to improve and to put right any errors during the skill. This type of feedback is effective as you can progress and learn but sometimes too much feedback can de-motivate a performer even though it is a form of creative criticism. This type of feedback is critical to experts if they want to fine-tune their techniques for example a trampoline performer may perform a backwards somersault with a pike. The teacher would say you need to keep your legs straight if you want to improve. Extrinsic/augmented feedback is when the feedback comes from outside the player, for example from a coach, teacher or friends. ...read more.

This will be both positive and negative feedback. Knowledge of results is extrinsic, this is the outcome of how well you have performed. For example a gymnasts score by the judges or even the result at the end of a tennis game. Performers used to be only interested in the results rather than what they have achieved but now research has shown that performers are taking more interest to the knowledge of performance rather than the knowledge of results. Overall the feedback has a big impact in learning of new skills, it boosts the confidence of youngsters and also motivates them. Feedback also helps athletes to enhance their performance as when given feedback they will be able to identify where they went wrong and how to improve it. ...read more.