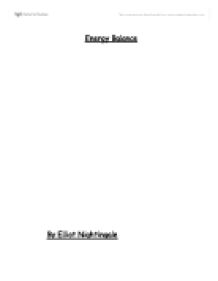 Energy Balance By Elliot Nightingale Energy Intake and Expenditure Energy intake is the amount of energy taken in buy the athlete's body through food and drinks. Energy in the body cannot be created or destroyed it can only be changed into different forms; this is the principle of energy conservation. Each different sports performer will require different energy intakes because of age, gender, sport, fitness level and some other factors. Energy expenditure is the amount of energy (Kcal) that a human being uses. This is influenced by the individuals: * Basal Metabolic Rate * Dietary Induce Thermogenesis * Physical activity * Adaptive Thermogenesis Basal Metabolic Rate Basal Metabolic Rate is the amount of calories per day your body burns, regardless of exercise. It changes with age, weight, height, gender, diet and exercise habits. Dietary Induce Thermogenesis Diet induced thermogenesis (DIT) can be defined as the increase in energy expenditure above basal fasting level divided by the energy content of the food ingested and is commonly expressed as a percentage. It is, with basal metabolic rate and activity induced thermogenesis, one of the three components of daily energy expenditure. Although DIT is the smallest component, it could play a role in the development and/or maintenance of obesity. Physical Activity Physical activity is any form of exercise or movement. Physical activity may include planned activity such as walking, running, basketball, or other sports. Adaptive Thermogenesis Adaptive thermogenesis (AT) ...read more.

This is mainly referring to any sports person who wants to stay at their optimum weight. When they would want to make massive gains in their training they would want to be at a negative energy balance so they are giving out more calories than taking in. A sporting example for this would be someone playing in a weight category sport and need to lose weight quickly. On a day when you are playing a game you would want to be more positively balanced because he will want a lot of energy for the game and to be at his peek of performance and he wont lose a lot of that energy. For a sporting example this would be a blocker in American football, these players need to be very big as they are the people who block others from defending. Protein Supplement: Recently there has been a massive boom in the usage of protein supplements, these are used as a supplement to a training session and are ideal for people who want to lay down muscle mass and who need to gain more protein in the body, these are normally high in whey protein because it contains hight levels of 2 essential acids these acids are the ones that are broken down during exercise. So when a sports performer is training this is a very useful way to get the amino acids that have been broken down during his training session. ...read more.

Carbo-loading aims to prevent the onset of fatigue during endurance events. If completed properly, carbo-loading can almost double the normal amount of stored carbohydrate found in a trained person. Whilst performance will be increasing because of the high carbohydrates in the body this may not have a great effect on the health of the performer, were more referring to obesity when we say that this is a critical condition and can lead to death if not dealt with immediately, also when he will be walking it will be putting a great strain on his joints, all the weight that is above his knees is being forced down onto his knees this could lead to cartilage damage when carbo-loading you shouldn't do this all the time or it can lead to obesity this should be done a few days before a event. Being obese can also have a poor effect on your performance because it will make you bloated, cause high blood pressure, heart burn all of these can have a much greater effect in the sense that they could lead to strokes and death, so being obese basically makes performing minimal intensity tasks such as walking up the stairs a great up hill struggle. When trying to play sport in this state it will be very difficult because, you wont be able to run for so long, you will get tired very quickly because of the excess weight you are carrying, you will lose breath very quickly because of all the fatty deposits clogging up your arteries that wont be allowing the oxygen to be distributed around the body sufficiently. ...read more.