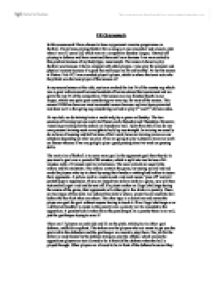 I have been playing football for as long as I can remember and joined a club when I was 12 years old, which was at a competitive Sunday League. I started off playing in defence

PE Coursework In this coursework I have chosen to base my personal exercise programme on football. I have been playing football for as long as I can remember and joined a club when I was 12 years old, which was at a competitive Sunday League. I started off playing in defence and have remained there until now because I am more suited to this position because of my body type; mesomorph. The reason I chose to play football was because I like to compete with other players. I also play for personal and physical reasons because it's good fun and keeps me fit and healthy. At my fist season at Elstree Vale FC I was awarded player's player, which is where the team vote who they think was the best player of that season is? In my second season at the club, my team reached the last 16 of the county cup which was a great achievement because hundreds of teams entered the tournament and we got to the last 16 of the competition. ...read more.

The main aim of football is to score more goal in the opponents goal then they do in you team's goal over a period of 90 minutes, which is split into two halves of 45 minutes with a 10 minute interval in between. The men in black are usually the referee and his assistants. The referee controls the game, by issuing yellow and red cards for players who try to cheat by using their hands or making bad tackles to injure their opponents. A yellow card is a caution and a red card means 'your off' and will probably get a suspension. If you are issued two yellow cards in a game, you will then automatically get a red and be sent off. If a player makes an illegal challenge during the course of the game, their opponents will either get a free kick or a penalty. There are two types of free-kick. ...read more.

Other players are allowed to be in front of the defence however they shouldn't be interfering with play. For a player to be onside he must be in line or behind two of the opposition players. The two remaining rules of football are when the when the ball goes out of play either behind the goal or on the sidelines. When the ball goes behind the goal the ref will either award a corner or a goal kick, whereas when it goes out of play in the sidelines the ref will award a thrown in for one of the two teams. My strengths in football are my stamina, speed and strength, both on ground and in the air. My speed is a good strength of mine because I usually tend to beat players by speed. My weaknesses are my vision and long balls. I am not a player which can create a killer pass or a great ball over from one side of the pitch to the other. I will improve this by working more on ball control in training. ...read more.