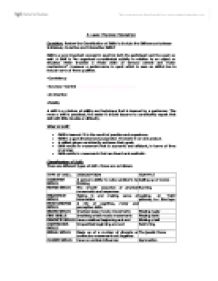 Review the Classification of Skills to Include the Differences between Individual, Co-Active and Interactive Skills?

A Level Physical Education Question: Review the Classification of Skills to Include the Differences between Individual, Co-Active and Interactive Skills? Skill is a very important concept in sport for both the participant and the coach as well. A Skill is "An organised co-ordinated activity in relation to an object or situation which involves a whole chain of sensory central and motor mechanisms". However a performance in sport which is seen as skilful has to include some of these qualities. -Consistency -Accuracy -Control Austen obfuscated jbruce1's rationalisation theory. -An intention -Fluidity A skill is a mixture of ability and technique that is learned by a performer. The more a skill is practised, the easier it should become to consistently repeat that skill with little trouble or difficulty. What is Skill? * Skill is learned. It is the result of practice and experience. * Skill is a goal directed and purposeful. It results in an end product. * A skilled player consistently achieves their goals. * Skill results in movement that is economic and efficient, in terms of time or energy. ...read more.

Each of these elements can be thought of as a continuum. This means that two ends of the continuum are opposites and there is a gradual change in characteristics from one end to the other. In preparing a performer for competition, coaches might need to consider the nature of the interactions between competitors and the extent to which the opposition can affect their player's performance. OPEN SKILLS Affected by environment Tackle in football SELF-PACED SKILLS Performer controls speed and timing of skill Tennis serve EXTERNALLY PACED SKILLS bb! Speed and timing is not controlled by performer Playing against opposition: COMPLEX SKILLS Skills requiring more thought Tackling in rugby SIMPLE SKILLS Require little thought to perform Potting a snooker ball; Individual, Co-Active and Interactive Skills There are many various skills that are performed in sport. Sometimes, we are on our, own, sometimes others perform around us, and other times, people perform along with us. This is the difference between individual, co-active and interactive skills. Individual and co-active skills both require a well thought out pre-leaned routine or sequence of movements. ...read more.

A Level Physical Education Interactive Skills are those in which the performance can be controlled by the opposition. In most games, how well you play is dependant on how well your opponent allows you to play. Highly interactive activities are those in which space is shared and in which body contact is allowed, for example Rugby or Football. There is potentially less interaction as less body contact is allowed in say, basketball, and less interaction still when players are separated, for example in tennis or volleyball. In theory, the greater level of interaction, the greater the potential for opponents to affect each other's performance. Thus maintaining possession and avoiding being tackled or intercepted are important tactics in invasion games. In conclusion, each sport has its own combinations of types of skill the performers need for it to be performed properly, safely and to a high standard. Due to this, some sports will not suit a particular person whereas another one will. Also, you can see that classifying skills, plays a big part for teachers and coaches, helping them to choose the most appropriate and effective ways of teaching their pupils and for the pupils to have the optimal quality of coaching possibilities. ...read more.