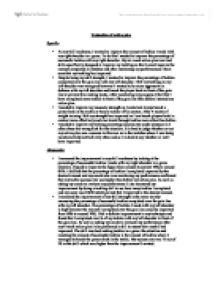 Evaluation of action plan Specific * As my skill weakness, I wanted to improve the amount of tackles I made with my right shoulder in a game. To do this I needed to improve the percentage of successful tackles with my right shoulder. My six week action plan involved drills specifically designed to improve my tackling so that I could improve the amount completed in matches and after monitoring my performances I have seen that my tackling has improved * Despite being my skill strength, I wanted to improve the percentage of tackles completed over the gain line with my left shoulder. I felt my tackling on my left shoulder was very good however I wanted to be more aggressive in defence with my left shoulder and knock the player back in front of the gain line to prevent him making yards. After monitoring my progress I feel that I have completed more tackles in front of the gain line than before I started my action plan. ...read more.

As well as asking my coach to evaluate my performance I also measured my improvement by doing a tackling drill to see how many tackles I completed and my score was 18/20 which proved that I improved to the desired amount. * I measured the improvement of my skill strength in the same way by measuring the percentage of successful tackles completed over the gain line with my left shoulder. The percentage of tackles I made with my left shoulder is high however the amount I completed over the gain line could be improved from 50% to around 70%. I felt a definite improvement in my technique and found that I completed over 3/4 of my tackles with my left shoulder in front of the gain line. As well as asking my coach to evaluate my performance after my 6 week action plan I also performed a drill to assess how much I had improved. The drill involved making tackles in a game like situation and counting the amount of successful tackles ie the amount of tackles where I managed to knock the person back in the tackle. ...read more.

As I did not make many kicks in the game I did the drill which I had been using in training and counted the amount of successful kicks I made which was roughly 70% which was not as much as I had hoped for. The overall success of my action was good as I reached my targets in 3 out of the 4 components but also felt an improvement in my kicking under pressure. Out of the 3 targets that I reached I also noticed that I went beyond my target which shows that the action plan was very successful. Despite not reaching my target for kicks that I make under pressure, I do not feel that I could make further improvements and if I had more chance to kick in matches then my target could be reached. I did feel however that some training sessions became repetitive and so in future I would add more variety to training sessions to make them more enjoyable. ...read more.