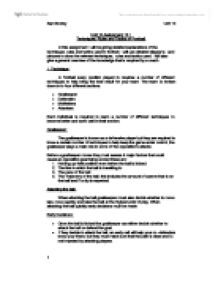 Techniques, Rules and Tactics of Football

Unit 10 Assignment 10.1 Techniques, Rules and Tactics of Football In this assignment I will be giving detailed explanations of the techniques, rules and tactics used in football. I will use detailed diagrams and pictures to show the relevant techniques, rules and tactics used. I will also give a general overview of the knowledge that is required by a coach. 1. Technique: In football every position played in requires a number of different techniques to help bring the best result for your team. The team is broken down in to four different sections: * Goalkeeper * Defenders * Midfielders * Attackers Each individual is required to learn a number of different techniques to become better and work well in their section. Goalkeeper: The goalkeeper is known as a defensive player but they are required to know a certain number of techniques to help keep the game under control, the goalkeeper plays a main role in some of the opposition's attacks. Before a goalkeeper moves they must assess 4 major factors that could cause an opposition goal being scored these are: 1. Holding up their position even before the ball is kicked. 2. The line in which the ball is travelling to 3. The pace of the ball 4. The Trajectory of the ball, this includes the amount of swerve that is on the ball and if a dip is expected. Attacking the ball: When attacking the ball goalkeepers must also decide whether to move late, move quickly and take the ball at the highest point of play. When attacking the ball quickly early decisions must be made: Early Decisions: * Once the ball is kicked the goalkeeper can either decide whether to attack the ball or defend the goal. * If they decide to attack the ball, an early call will help your co-defenders know your there, but they must make sure that the path is clear and is not impeded by attacking players. ...read more.

If you get a spin on the ball this then produces a swerve, and makes the cross harder for the goalkeeper to cut out. The outside of the foot can also be used to take corner kicks, but is not preferred by players because it is harder to control. When taking a corner kick is usually best to aim on the edge of the six yard box, and not into it. As anything inside this the six yard box will be easily caught by the goalkeeper. Apart from the near and far post crosses, and the flick-on, another option is to play the ball short for a team mate to play the cross. The idea is to change the angle of the cross, and get the ball closer to the goal. Attackers The Volley: Volley technique is a difficult soccer skill to master, but volleys have produced many spectacular goals. As well as goal scoring, volleys can be used for passing, and kicking the ball away from danger in your own area. In tight situations, it is often better for a defender to volley the ball away than to try to control the ball at a difficult height. The kicking techniques used for the full volley is different from the half volley, and the side volley pass. One of the secrets of great volleys is the swivel motion. Start from a square position with both feet a comfortable distance apart. Then, without moving your feet twist your upper body to the right until your left shoulder is facing directly in front of you. Next, twist back to the right until your right shoulder is facing in front of you. This is the swivel motion that can improve your volleying technique, and it can be practised without a ball. Another way of thinking of this twisting motion is as a corkscrew. For a left-footed volley twist first to the right, and then to the left. ...read more.

For when the ball is either near the touch line or in the area the goalkeeper should be 1/2 a yard off their line and approximately 3 yards from the nearest post to them, as sown in the diagram above. Attacking Tactics: Free Kicks: Taking free kicks is an important skill that requires awareness of football tactics as well as sound technique. Free kicks provide an opportunity to control play, and around the penalty area they are goal scoring opportunities. The coach should plan several attacking set plays with his team, including free kicks from different angles, so that each player knows what he should be doing. When taking free kicks around the penalty area, the fewer touches before shooting at goal the better. Teams and coaches should aim for a direct shot or a single pass before shooting, because set plays involving more than one pass allow plenty of time for the defense to organise and close down. Here are some example plays: * A direct shot around or over the wall. * A pass to the side of the wall followed by a shot at goal. * A chip over the wall towards the edge of the six yard box aiming for a player to head into goal. Other tactics include decoy runs or late runs into the penalty area. For example, a player might run up to the ball as if to take the free kick himself, but step over the ball, and run into an attacking position looking for a pass. Another tactic is to put a player on the end of the wall, to disrupt the wall, or to move late to the side of the wall looking for a pass. In the midfield, free kicks are opportunities to build an attack. Look to take the free kick quickly if there is a player with space, but otherwise allow time for your own team to push forward. ?? ?? ?? ?? Sam Morley Unit 10 1 ...read more.