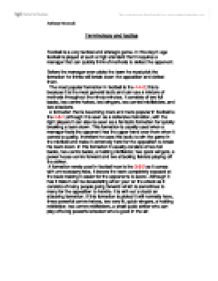 Termanology and tactics in football

Terminology and tactics Football is a very tactical and strategic game. In this day in age football is played at such a high standard that it requires a manager that can quickly think of methods to defeat the opponent. Before the manager even picks the team he must pick the formation he thinks will break down the opposition and defeat them. The most popular formation in football is the 4-4-2; this is because it is the most general tactic and can use a mixture of methods throughout the ninety minutes. It consists of two full backs, two centre halves, two wingers, two central midfielders, and two attackers. A formation that is becoming more and more popular in football is the 4-5-1; although it is seen as a defensive formation, with the right players it can also be seen as a fantastic formation for quickly breaking a team down. This formation is usually used when a manager feels the opponent has the upper hand over them when it comes to quality, therefore he uses this tactic to win the game in the midfield and make it extremely hard for the opposition to break his team down. ...read more.

If you cannot tackle you are left relying on intercepting passes when your opponents make a mistake. Tackling allows you to compete for the ball, and take the initiative. It's not just defenders, who need to be able to tackle. Even forwards should be able to make a sliding tackle. The football team that can tackle well can take much of the initiative away from the opposition, denying them space, and putting them under pressure. It's best to tackle with the foot that is furthest from the ball. This gives you extra reach, and reduces the chances of giving away a foul. In football there are methods of fouling off the ball, which is not in the referee's sight, to put the opposition player off. Tussling and muscling your opponent is a way which will put him off coming towards you again. In football the offside rule gives the defending team a massive advantage as it allows them to dictate how far or deep the strikers are. ...read more.

The are various types of passing in football certain ones being more appropriate than other in certain situations: long ball is usually used when there is a big target men up front so you can aim all balls for him which he lay to incoming midfielders. Through balls are played when there is some one quick up front because the ball is played slightly ahead of the player so it helps to be as quick as possible in order for the player to make as much room as possible. Mixed passing is suitable when the whole tam is of around the same ability as all the player's strengths will be used. One-two's are great ways to trick opponents, a successful one-two starts with a player dribbling with the ball and as he sees an opposition player coming towards him to try to either intercept or tackle him he passes the ball, usually to the left or right, make a run forward and receive the ball back to continue dribbling. ?? ?? ?? ?? Anthony Nawrocki ...read more.