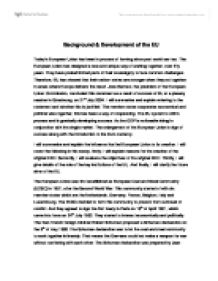 Background and Development of the EU

Background & Development of the EU Today's European Union has been in process of forming since post world war two. The European Union has designed a new and unique way of working together, over fifty years. They have pooled limited parts of their sovereignty to face common challenges. Therefore, EU has showed that their nation- states are stronger when they act together in areas where Europe delivers the result. Jose Barroso, the president of the European Union Commission, concluded this statement as a result of success of EU at a plenary session in Strasbourg, on 21st July 2004. I will summarise and explain referring to the statement and whether this is justified. The member states cooperates economical and political wise together, this has been a way of cooperating. The EU system is still in process and is gradually developing success. As the GDP is noticeable rising in conjunction with the single market. The enlargement of the European Union is sign of success along with the introduction to the Euro currency. I will summarise and explain the influence that led European Union to its creation. I will cover the following in this essay, firstly; I will explain reasons for the creation of the original EEC. ...read more.

This was brought into practice by removing the borders between the members of states and not paying duties on goods moved. Supporting each other will make the economy grow, as there are no barriers for trading in EU. The Treaty of Rome also established the four institutions, the parliament, the court of justice, council minister and the commission. Common Agriculture Policy (CAP) was part of the common market. The purpose of this policy was to maintain goods and prices, and how farming was organised. However, it is not only the economy that was on a path of success, The Treaty of Rome also made sure for the strong development of the nuclear industry. And also the idea of Qualified Majority Voting was introduced. The Rome Treaty was followed by The Merger Treaty signed on 8th of April 1965 in Brussels. This came into force on the 1st of July 1967. The principle of the Merger Treaty was to make the above mentioned three communities which are the ECSC, EEC and the Euratom to establish a single council and a single commission. This Treaty was provoked to establish three communities in one. The then Commission of the European Communities is the branch of the now European Union in Brussels. ...read more.

The Maastricht Treaty has a broad impact. As it was ground of the creation of the Euro Currency. It introduced the Three Pillars of the European Union. These are the community pillar that involves the economy, the social and environmental policy. The second pillar established was The Common Foreign Security Policy pillar (CFCP), which is responsible military and peace making in Europe and promotes the international cooperation. The third pillar established was Justice and Home this now known as Police and Judicial Cooperation in Criminal Matters (PJCC). This pillar is responsible of fight against crime and mainly focused on asylum and immigration. The Amsterdam Treaty was follow in 1997. It came into force in on the 1st May 1999. This Treaty wad mainly focused on democracy among the citizens rights individually in Europe. The Amsterdam Treaty also focused on intimate cooperation and increasing the powers of the European Council, which failed in solving the institutional issues. The following Treaty was the Athens Treaty, which introduced the new 10 member of states on 16th of April 2003, it was signed in Athena a state in Greece. This Treaty was focussed on the adjustment needed on the earlier proposed Treaty's. The 10 members of states that joined the EU was the Czech Republic, Cyprus, Estonia, Hungary, Latvia, Lithuania, Malta, Poland, Slovakia and Slovenia. This was the biggest accession in the EU history. ...read more.