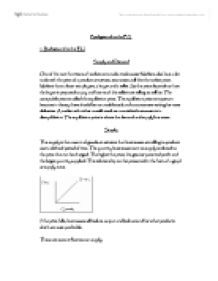 Background to the EU.

Background to the EU 1. Background to the EU Supply and Demand One of the main functions of markets is to make trade easier Markets also have a lot to do with the price of a product or service, economics, call this the market price. Markets have a least two players, a buyer and a seller. So the price depends on how the buyer is prepared to pay and how much the sellers are willing to sell for. The acceptable price is called the equilibrium price. The equilibrium price is important because in theory there should be no unsold stock and no customers waiting for more deliveries. A market with either unsold stock or unsatisfied customers is in disequilibrium. The equilibrium price is where the demand and supply line cross. Supply The supply is the amount of goods or services that businesses are willing to produce over a defined period of time. The quantity businesses want to supply is related to the price that can be charged. The higher the price, the greater potential profit and the larger quantity supplied. This relationship can be presented in the form of a graph or supply curve. If the price falls, businesses will reduce output and look around for other products which are more profitable. ...read more.

Unit costs begin to rise because: > Local labour becomes scarce and firms now have to offer higher wages to attract new workers > Land and factories become scarce and rents begin to rise > Local roads become congested and so transports cost begin to rise 2. Main Treaties The treaty of Rome 1957 The treaty of Rome was signed on the 25th of March by six European countries: 1. Germany 2. Belgium 3. France 4. Italy 5. Luxembourg 6. The Netherlands They signed two agreements on the 25th March: > The Community Economic European (CEE) > The European Atomic Energy Community (EURATOM) The main agreements of the treaty are: > Creation of a single integrated market > Free movement of goods, labour , services, and capital between its members > Establishment of common external tariffs on all imported goods > Harmonisation of business laws in membership countries ( i.e. taxes) and common policies for agriculture, transport and business competition > The creation of European social fund > Promotion of trade with developing countries. This treaty gives: > The community the right to make laws that apply to all the member nations. > The individual the right to take any other individual, firm or government to court if they break the law. ...read more.

Establish a common foreign and defence policy and create a greater co-operation among the twelve police and justice systems. There are four main aims of the maastricht treaty: 1. The first of the four economic criterions concerns price stability in the national state. 2. A second criterion that was considered to be important is the long-term interest rates of the nations. 3. The third condition that has to be met regards the stability of currency. 4. The fourth economic condition that the nation states have to satisfy deals with the national average budget deficit. This treaty gave the community more power and introduced the concept on union citizenship. It also changed the name of the union from the European Community to the European Union. This treaty also developed the common foreign and defence polices. The advantages this policy has are: > The costs would go down as it would be free trade and the nations would be of "similar economic state" and it would do the same for price as well. Prices and costs would be able to be under control as the market will be steady. > The nations would be trading freely and able to grow in the market and sustain production and sales of the product easily due to the fact the EU is fairly balanced and in such a stable market place. ...read more.