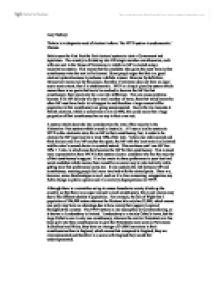 'Britain is in desperate need of electoral reform. The FPTP system is undemocratic.' Discuss.

Lucy Nuttney 'Britain is in desperate need of electoral reform. The FPTP system is undemocratic.' Discuss. Britain uses the First Past the Post electoral system to elect a Government and legislature. The country is divided up into 659 single member constituencies, each with one seat in the House of Commons, to which an MP is elected using a majoritarian system. This means that the candidate who gains the most votes in that constituency wins the seat in Parliament. Some people argue that this is a good electoral system because it produces a definite winner. However by definition, Democracy means rule by the people, therefore if everyone does not have an equal say to some extent, then it is undemocratic. FPTP is a simple plurality system which means there is no quota that has to be reached to become the MP for that constituency, there need only be a one vote difference. This can cause problems because if an MP did only win by a small number of votes, then that would mean the other MP must have had a lot of support to and therefore a large amount of the population in that constituency are going unrepresented. Due to the low turnouts at British elections, which is sometimes as low as 60%, this could mean that a huge proportion of that constituency has no say in their own rule. A system which does take into consideration the vote of the majority is the Alternative Vote system which is used in Australia. AV uses a similar system to FPTP as the electorate votes for an MP in their constituency, but, in order to be elected, the MP must receive at least 50% of the vote. ...read more.

It is easier for minor parties to gain representation if their support is concentrated in particular regions, than it is for a party with a larger, more widely spread support. The SNP and Plaid Cymru are the main parties of Scotland and Wales and they consistently win seats in Parliament in their own constituencies as they do not compete for popularity in a large area such as England. Plaid Cymru has more voice in Parliament than their vote presidented due to one of their main policies being to preserve the Welsh language and their campaigning being concentrated in Welsh speaking areas. FPTP is restrictive in this way as it prevents parties from having any ambition to try and gain more seats than they are used to getting and it also acts as a deterrent to MPs who may want to form their own party, as they know there is no chance to influence a big enough amount of people to win more seats than the two main parties. FPTP makes it possible for one party to receive more votes than another and yet gain fewer seats. This may mean that the losing party may have more say than they should in the policies of the Governing party, as the Commons control legislation, meaning the Government is inefficient in passing it's own laws. In 1951 the Conservatives gained 0.8% less of the vote than Labour, but 26 more seats and in 1974 Labour won 7% less of the vote than the Conservatives and 4 more seats. Labour is especially favoured by FPTP as, when the Conservatives won a record 14 million votes, they only gained a 21 seat majority but Labour, gaining fewer votes, won a 167 seat majority. ...read more.

The winning party is held responsible for putting their proposals into practise and is directly accountable to the electorate for any decisions that are made. The single member constituency system is praised by some as well because it is said to bring the MPs and constituencies together as only one MP is responsible for the welfare of the citizens of that constituency and encourages MPs to act on behalf of the electorate rather than for their own party. This, in turn, gets the public more involved with the Government of the day and could be used to restore people's faith in British politics. In conclusion to this I would definitely say that Britain was in great need of electoral reform and that FPTP is an out dated and undemocratic system. I think a more appropriate system would be a system such as open party list as it is proportional and gives the voter a wide choice, getting them more involved in politics. It is unlikely that electoral reform will occur because it would require a major constitutional change and it might put people off from voting if a too confusing system is adopted. However, there is some suggestion that the devolved states, such as Ireland are being considered as an experiment to see whether these systems would work in Britain. Ireland for example, already uses STV in both the Republic and the North so Britain could be looking at the effects of it's use on Ireland. However, it is unlikely to occur for a while yet as the country is stable as it is and people normally adopt an attitude of 'if it's not broke don't fix it'. ...read more.