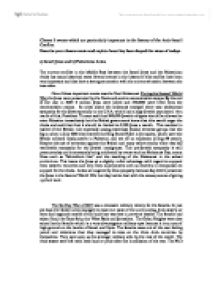 Choose 3 events which are particularly important in the history of the Arab-Israeli Conflict. Describe your chosen events and explain how they have shaped the views of todays a) Israeli Jews and b) Palestinian Arabs.

Choose 3 events which are particularly important in the history of the Arab-Israeli Conflict. Describe your chosen events and explain how they have shaped the views of todays a) Israeli Jews and b) Palestinian Arabs The current conflict in the Middle East between the Israeli Jews and the Palestinian Arabs has many historical roots. Several events in the history of this conflict have been very important and also have a strong connection with the current situation between the two sides. One of these important events was the Nazi Holocaust. During the Second World War the Jews were persecuted by the Nazis and sent to concentration camps. By the end of the war in 1945 6 million Jews were killed and 250,000 were freed from the concentration camps. As news about the holocaust emerged there was widespread sympathy for the Jews especially in the U.S.A. which had a large Jewish population. As a result of this, President Truman said that 100,000 Jewish refugees should be allowed to enter Palestine immediately but the British government knew that this would anger the Arabs and said that that it should be limited to 1,500 Jews a month. ...read more.

The Six Day War of 1967 was a dramatic military victory for the Israelis. In just six days the Israeli army managed to take out most of the surrounding Arab state's air force and regained control of the land that was lost in previous battles. The Israelis had taken Sinai, the Gaza Strip, the West Bank and Jerusalem. The Golan Heights were also seized by the Israelis which is a very advantageous military spot because it is an area of high ground on the border of Israel and Syria. The Israelis came out of the war feeling proud and victorious that they managed to take on the three Arab countries by themselves. They were seen as the stronger military side by the rest of the world. The Arab states were left with little land or pride after the humiliation of the war. The PLO (Palestine Liberation Organisation) began to grow in size because the Palestinians were determined to fight for their homeland after this embarrassing defeat. ...read more.

It was agreed that Israeli troops would be withdrawn from Gaza and most of the West Bank leaving the Palestinian Council to run it for 5 years after which a final settlement would be decided upon. In return for this the Palestinians were to officially recognise the Jewish state. This agreement however didn't necessarily lead to peace. Although many people (both Israeli and Palestinian moderates) agreed with the peace agreement, looking forward to a more peaceful future, some extremist groups didn't and violence erupted. In 1995 Yitzhak Rabin was assassinated by a fellow Israeli, a Jewish extremist, who was in opposition to any form of agreement with the Palestinians and any loss of "bible land". As time progressed, the peace didn't. Both sides were unwilling to compromise after the struggling and hardship they had endured to both get their own land, in particular to have Jerusalem as their capital. Even now these views remain and this is why the violence and bloodshed continues. Each side refuses to relinquish land to aid peace believing it to be rightfully theirs. ...read more.