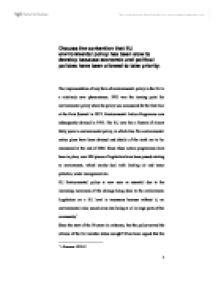 Discuss the contention that EU environmental policy has been slow to develop because economic and political policies have been allowed to take priority.

It is clear that Spain did not object to the use of qualified majority voting because they do not want to protect the environment. For Spain, having to adhere to environmental policy established on an EU level (initiated by countries at a more advanced stage economically as well as environmentally) would force them to enforce this legislation. This would have an adverse effect on such a countries economy, as the enforcement of environmental legislation is known to be extremely expensive. This would reduce the country's economy and in turn increase unemployment and inflation to name just a few effects. Greece and Portugal are other countries in a similar situation. These issues are regarded as being far more important by the vast majority of the electorate and by the EU and should therefore take priority. As mentioned before, the economy and environment are closely linked to one another, and fear of a downward turn in the economy through strengthening of the environmental policy is a definite reason as to why environmental policy has been slower to develop than hoped by some. It is this conflict of priorities that may be attributed to the slow development of EU Environmental policy, although Germany has argued that the exact opposite relationship also can exist. ...read more.

The way in which the economy has been favoured when there is a conflict of interests between environment and economy (unemployment, inflation etc) should not be seen as a surprise, as statistics clearly show that the general public consider economical issues more important than environment issues, and the EU places it fourth in its list of priorities.13 So therefore, in this sense economic policies are clearly going to be developed more quickly than environmental ones. Because of this fact though, one should not believe that the present day EU does not consider the environment an important issue, and indeed it must if it is to achieve its goal of "transforming the European Economy into one whose development world be sustainable for generations to come"14. * * * * * 1 L.Krammer 1992:53 2 Policy Making in the EU 3 Article 235 4 Article 100a 5 http://mhs.trinity.com-cm.ac.uk/europe/b1_a1.htm 6 Weale 1992 a:75-90 7 http://www.chernobyl.co.uk (28/10/2001) 8 Policy Making in the EU Page 236 9 Vogel, 1993 B:125 10 Liefferink et. al 1993b:4 11 The European Union Page 77 12 EC 1997 (Notes in class) 13 Notes made in Class, 2001 14 Taking European Environmental Policy into the 21st Century - A Summary of the Commission's Progress Report and Action Plan on the Fifth Programme of Policy and Action in Relation to Sustainable Development" ?? ?? ?? ?? 1 ...read more.