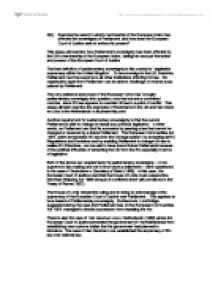 Examine the extent to which membership of the European Union has affected the sovereignty of Parliament, and how does the European Court of Justice seek to enforce its powers?

2(b) Examine the extent to which membership of the European Union has affected the sovereignty of Parliament, and how does the European Court of Justice seek to enforce its powers? This essay will examine how Parliament's sovereignty has been affected by the UK's membership of the European Union, taking into account the action and powers of the European Court of Justice. The best definition of parliamentary sovereignty in this context is 'legislative supremacy within the United Kingdom'. To be sovereign in the UK, therefore, Parliament must be supreme to all other institutions affecting UK law. No organisation apart from Parliament can be able to challenge or reverse a law passed by Parliament. The very existence and power of the European Union has brought parliamentary sovereignty into question, now that we are a committed member, since EU law appears to override UK law in a point of conflict. This essay will later examine the examples of Factortame in the UK and Van Gend en Loos in the Netherlands to illustrate this point. ...read more.

The case of Van Gend en Loos established the supremacy of EU law over national law. Any disputes over the meaning of EU law must be brought before the European Court of Justice, which exists to assist with the interpretation and application of EU law. It must be noted that the ECJ cannot decide the outcome of cases that are brought before it, it can only assist with the interpretation of the law. The European Court of Justice also has powers to take action against member states whose laws are not compatible with EU legislation or who fail to realise EU Directives. The European Court of Justice consists of 27 judges representing member states and is presided over by a President. Eight Advocates General are also present to advise the judges on particular cases in the ECJ. The Court may sit as a Grand Chamber (13 judges) in complex cases, or it can take place in chambers of three or five Judges. ...read more.

Although it may seem restrictive on our freedom as a country, membership of the European Union creates a legal obligation to consider the policies of neighbouring countries when creating and implementing UK laws. Furthermore, the EU has introduced important laws that have benefited many in the United Kingdom, such as the protection of worker's rights in the Working Time Directive whereby most employees should not have to work over 48 hours a week unless they choose to by written consent. Nevertheless, many people (often calling themselves 'eurosceptics') resent being subject to the laws of 'foreigners' and complain that the power of Parliament to determine British law has been restricted. People such as these must remember that a large number of MEPs are in fact British and therefore it is not foreigners who choose EU legislation but democratically elected representatives of Britain. We as citizens of the United Kingdom therefore have an important say in EU law as well as our own Acts of Parliament, whether or not they are implemented directly through the House of Commons. ...read more.