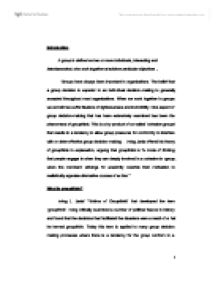 Introduction A group is defined as two or more individuals, interacting and interdependent, who work together at achieve particular objectives. Groups have always been important in organizations. The belief that a group decision is superior to an individual decision-making is generally accepted throughout most organizations. When we work together in groups we sometimes suffer illusions of righteousness and invincibility. One aspect of group decision-making that has been extensively examined has been the phenomena of groupthink. This is a by-product of so-called `cohesive groups' that results in a tendency to allow group pressures for conformity to interfere with or deter effective group decision-making. . Irving Janis offered his theory of groupthink in explanation, arguing that groupthink is "a mode of thinking that people engage in when they are deeply involved in a cohesive in-group, when the members' strivings for unanimity override their motivation to realistically appraise alternative courses of action." What is groupthink? Irving L. Janis' "Victims of Groupthink" first developed the term `groupthink'. Irving critically examined a number of political fiascos in history and found that the decisions that facilitated the disasters were a result of what he termed groupthink. ...read more.

They may stereotype members of the group itself - they more readily stereotype rivals, enemies, other departments and even expert advisers who slow down or challenge their decision-making tasks. 2. Bounded rationality and tethered assumptions Group tend to suffer from their own bounded rationality. Members fall under the impression that they are right - if data/evidence suggests they may be wrong. Members reassure others that their interpretation and perspective on matters is correct. 3. Belief in Inherent Morality This is an extension to the invulnerability and righteousness symptoms. Janis feels this can occur when the group as a whole 1. Feels they are doing the right thing and 2. Believe their cause to be morally underpinned. They exhibit an illusion of morality. A group may see that * They cooperate well with each other and/or have a powerful leader who gives energy to the group. * The feeling is that "we are good guys and our decisions are in everyone's best interests. We are doing this to benefit everyone." 4. Self-Censorship. In a groupthink situation, one characteristic is that members may submit themselves to self-censorship. ...read more.

However, increased cohesiveness does not always mean increased productivity. Increased cohesiveness means that members are able to influence on another more. If they decide to use this influence for increased productivity, they could be very effective. However, low productivity may have several related caused within a group or organization, in which case simply increasing the cohesiveness or the group will not solve the productivity problem. Why manager needs to consider relevant research implications? Because From the above it can be seen that the best way to avoid Groupthink is to have an understanding and awareness of it. Groups that constantly question decisions are likely to never encounter Groupthink. Groups are useful and necessary in many situations. They often solve problems that individuals cannot. Groupthink can limit the value of groups. Identifying a set of characteristics including an illusion of invulnerability, self-censorship, and others can recognize groupthink problems. Janis recommends many strategies for avoiding Groupthink. Groups can assign the role of critical evaluator to each member, divide into subgroups, invite experts to sit in on meetings, and so on. Groupthink is a problem that can have destructive consequences. If group members are aware of Groupthink and are constantly checking for it the damaging effects of this condition can be avoided. 1 http://www.trans4mind.com/global/group.html ?? ?? ?? ?? 1 ...read more.