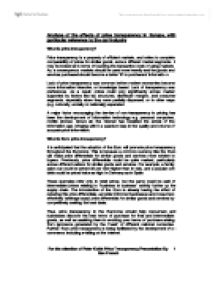 Analyse of the effects of price transparency in Europe, with particular reference to the car industry

Analyse of the effects of price transparency in Europe, with particular reference to the car industry What is price transparency? Price transparency is a property of efficient markets, and refers to complete comparability of prices for similar goods, across different market segments. It may be looked at in terms of lowering the transaction costs of using markets. As, a consequence, markets should be used more heavily and the goods and services purchased should become a better 'fit' to purchasers' information. Lack of price transparency was common before modern economies become more information intensive, or knowledge based. Lack of transparency was preferences. As a result, prices could vary significantly across market supported by factors like tax structures, distributor margins, and consumer segments, especially when they were partially dispersed, or in other ways (e.g. culturally, socially or nationally) separated. A major factor encouraging the demise of non-transparency in pricing has been the development of information technology e.g. personal computers, mobile phones. Above all, the Internet has heralded the arrival of the information age, bringing with it a quantum leap in the quality and volume of accurate price information. What is Euro price transparency? It is anticipated that the adoption of the Euro will promote price transparency throughout the Eurozone. This is because a common currency like the Euro will make price differentials for similar goods and services more evident to buyers. ...read more.

What led them to make this claim and why did they need to announce it as a major advertising campaign? It was one of the most dramatic recent signs of the pressures of price transparency. It proved prescient, because since the autumn of 2000 all major car manufacturers have had to reduce their prices in the UK substantially. They had a long way to go, since at the time of the Ford advert, UK prices were as much as 40% above the EU average as table 1 shows. Table 1 - RPI for most and least expensive models of car across Europe - 1st November 1999 Maker/model Most Expensive Least Expensive Ford Mondeo UK - 138 DK - 74 Opel Corsa UK - 125 DK - 88 SEAT Ibiza UK - 133 DK - 84 VW Polo UK - 149 Fin - 100 Index 100 = average in Euro currency countries (Source: European Commission) Car Price variation by country in 2004 Ranked by retail price index Country Pre-tax price Retail price Portugal 94 127 UK 117 126 Netherlands 94 114 Austria 104 110 Greece 84 104 Switzerland 100 121 Germany 99 107 France 97 98 Sweden 96 97 Belgium 95 99 Italy 95 98 Spain 92 95 Index 100 = average in Euro currency countries (Source: Eurocarprice.com) Among the Euro currency countries, the largest increases in manufacturers' pre-tax prices compared to 12 months ago occurred in Spain (1.9%) ...read more.