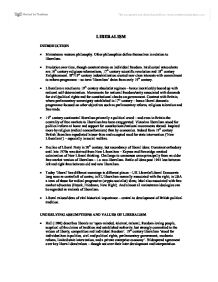 VICTORIAN LIBERALISM * Although the term 'liberal' was applied from the early 19th century, the Liberal Party emerged only in the 1850s from a party realignment of Whigs, radicals and Peelite Conservatives. Gladstone (1809-98), originally a Con. follower of Peel, the embodiment of Victorian liberalism. Domination of Liberal party, and shaped in his own image; he became more radical and populist with age. Also inspired by Christian moral fervour - struck chord among nonconformists. So Gladstonian liberalism a moral crusade (Vincent, 1966). * Several strands. Parliamentary reform - derived from Whig tradition; advocacy of Bright, then Gladstone turned it into a populist cause. Proposals for modest franchise extension developed into radical demands for full manhood suffrage. Nonconformist strand - while the 1860s parliamentary party was still overwhelmingly Anglican, the Liberals were becoming 'the party of the nonconformist conscience' (Vincent, 1966).Nonconformist pressures spawned the National Education League (to campaign for a national, free and secular system of education), which provided the model for the National Liberal Federation (1877) which established a national organisation for he Liberal party, and tipped it decisively towards radical nonconformism. By the 1880s the PLP (and the party in the country) was predominantly nonconformist. * Support for liberal and nationalist movements in Europe, especially Italian unification, helped create Palmerston's 1859 government and kept it intact; Gladstone campaigned against the Bulgarian atrocities, bringing him out of premature retirement and into close collaboration with the nonconformists. The religious fervour behind his mission to pacify Ireland both split the party and strengthened the moral element in liberalism. * 'Manchester liberalism' also quite influential in the party after 1859. Free trade was established as a liberal principle. Gladstone, as Chancellor, built on earlier work of Cobden and Bright (Anti Corn Law League, 1846 - repeal of Corn Laws reflected transfer of power from landed to manufacturing interests) by abolishing a range of duties; Cobden negotiated Anglo-French trade treaty of 1860. ...read more.

But ultimately it was the Liberals that swallowed the SDP, and not the other way round - so the modern LDs are the clear lineal descendants of the old Liberal party. * Paradoxically, as fortunes of the Liberals/LDs have risen, LD ideas have become less distinctive. For most of post WW2 period Liberals adopted an intermediate position between Con and Lab. Briefly, in early 1980s, Liberals (and allies) seemed to offer a distinctive middle way between Thatcherism and left wing socialism. Since then Lab has reoccupied the centre ground previously vacated, leaving the LDs with little ideological space and few distinctive ideas or policies - on the management of the economy, constitutional reform, Europe, defence and foreign policy the differences between the LDs and Lab are ARGUABLY more of degree than kind. * Under Ashdown's leadership, coalition with Labour seemed logical, even likely, given Blair's keenness to heal the divisions on the centre-left which had left the Cons dominant for most of the 20th century. Coalitions in LG and in the devolved bodies provide continuing impetus - but sheer scale of Lab's victories in 1997 and 2001 (and resistance within both parties) have weakened the project. LDs have pursued a more independent and critical line under Kennedy, without yet returning to earlier policy of equidistance between Lab and Con. * Attempts made to articulate a distinctive LD philosophy in these unpromising political circumstances - by Wallace (1997), Russell (1999) and Ballard (2000). Yet terminology employed - cooperation, working with others, partnership politics, community - shared by New Labour and progressive Conservatives. Higher profile of LDs has drawn attention to considerable diversity of views in the party - 'free market liberals, social liberals, conservatives with a social conscience and dissatisfied ex-Labour voters, greens, anarchists ....' (Ballard, 2000). Shows tolerance and inclusiveness? But not ideological coherence. The real problem is that there is now little distinctive ideological ground for the LDs to occupy, but this underlines the widespread acceptance of liberal ideas across mainstream British political parties. ...read more.