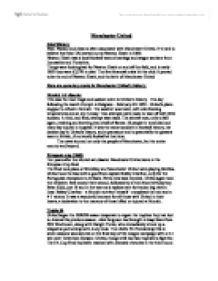 Manchester United Brief History Flair, Passion and class is often associated with Manchester United. It's hard to believe that Man Utd started out as Newton Heath in 1880. Newton Heath was a local football team of carriage and wagon workers from Lancashire and Yorkshire. Things were looking bad for Newton Heath on and off the field, and in early 1902 they were �2,270 in debt. The first financial crisis hit the club. It proved to be the end of Newton Heath, and the birth of Manchester United Here are some key events in Manchester United's history: Munich Air disaster This was the most tragic and saddest event in United's history. The day following the team's triumph in Belgrade - February 6th 1958 - United's plane stopped to refuel in Munich. The weather was harsh, with sub-freezing temperatures and an icy runway. Two attempts were made to take off with little success. A third, and final, attempt was made. ...read more.

Treble 99 United began the 1998/99 season desperate to regain the trophies they had lost to Arsenal the previous season. Alex Ferguson had brought in Jaap Stam from PSV Eindhoven, along with Dwight Yorke, who immediately struck up a telepathic partnership with Andy Cole. The Club's 5th Premiership title in seven seasons was secured on the final day of the League campaign with a 2-1 win over Tottenham Hotspur. United, though still had two trophies to fight for. The FA Cup Final had been reached with dramatic victories in the third round at home to Liverpool, and an eventful semi-final replay against Arsenal, which included a red card for Roy Keane, a penalty save in the final minute of normal time by Peter Schmeichel and an incredible solo goal to win the match from Ryan Giggs. The final was less eventful, United claiming their third Double in just six seasons with a 2-0 victory over Newcastle. Four days later Alex Ferguson led his men out again, this time in the final of the European Champions League at Barcelona's Nou Camp Stadium. ...read more.