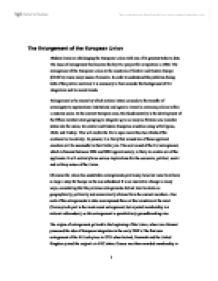 The Enlargement of the European Union

The Enlargement of the European Union Modern times are challenging the European Union with one of its greatest tasks to date. The issue of enlargement has become the key EU project for completion in 2002. The enlargement of the European Union to the countries of Central and Eastern Europe (CEEC's) raises many issues of concern. In order to understand the problems facing both of the parties involved, it is necessary to first consider the background of EU integration and its recent trends. Enlargement is the means by which national states concede to the transfer of sovereignty to supranational institutions and agree to invest in common policies within a customs union. In the current European case, this fundamentally is the development of the fifteen member state grouping to integrate up to as many as thirteen new member states into the union, ten central and Eastern European countries along with Cyprus, Malta and Turkey. This will enable the EU to span more than two-thirds of the continent in its entirety. At present, it is likely that around ten of these applicant countries will be successful in their bid to join. The next round of the EU enlargement, which is forecast between 2004 and 2006 approximately, is likely to contain six of the applicants. It will certainly have serious implications for the economic, political, social and military nature of the Union. Of course the Union has undertaken enlargements previously, however none have been as large a step for Europe as the one scheduled. It is an innovative change in many ways, considering that the previous enlargements did not involve states as geographically, politically and economically diverse from the current members. Also each of the enlargements to date encompassed three or four countries at the most (Norway took part in the most recent enlargement, but rejected membership in a national referendum), so this enlargement is quantitatively groundbreaking also. ...read more.

The consequences of which were politically driven, it had devastating economic effects for industry and agriculture in the former German Democratic Republic. It created a high level of unemployment and, despite massive financial transfers from West to East Germany, little has changed with regard to the structural problems of the East. In fact, the net transfer from West to East Germany between 1990 and 1997 to the tune of approximately 500 million Euro, now represents a huge burden also for the West German financial, fiscal and social system. The CEEC's are also anxious about whether there exists a huge gap between the stated political will for enlargement and its realistic implementation. None of the candidate countries for membership meet the economic conditions for quick accession. The differences between the political, economic and legal systems, developed over forty years of separation, are not so easily overcome and there is those who hold the opinion that it is irresponsible for Western European politicians to keep encouraging unrealistic expectations.17 In the report by the commission of November 2000 on the candidate countries, it discusses the political criteria of the Copenhagen summit. These refer mainly to the need for democracy, human rights and the protection of minorities. All the applicants have now met these requirements (except Turkey, with whom substantive dialogue has yet to take place), even if some still have a little progress to make in the area of protection of minorities. The need for reform of the judicial systems is pointed out, effective enforcement of the acquis is impossible without this.18 Since the EU is in the first place an economic union or, more precisely, a subsidies community, when one considers that 80% of its budget goes to the different subsidy funds, we can anticipate that accession negotiations will take longer than generally anticipated. Also the conditions for accession and the results of the negotiations are likely to produce smaller development resources than expected and enlargement may well lead to a dispute over budget allocations within ...read more.