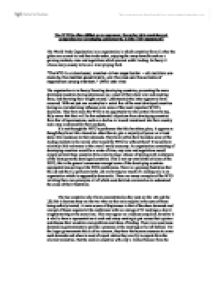 The WTO is often vilified as an oppressor, favouring rich countries and companies over developing counterparts. Is this a fair assessment?

The WTO is often vilified as an oppressor, favouring rich countries and companies over developing counterparts. Is this a fair assessment? The World Trade Organisation is an organisation in which countries from all other the globe can commit to and then trade under, enjoying the many benefits such as a growing markets, rules and regulations which prevent unfair trading. In theory it allows every country to be on a level playing field. "The WTO is a rules-based, member-driven organization - all decisions are made by the member governments, and the rules are the outcome of negotiations among members." (WTO web-site) The organisation is in theory liberating developing countries, preventing the more developed countries having dominance as a result of their sheer size and resulting force, and throwing their weight around. Unfortunately the latter appears to have occurred. With not just one country but a select few of the most developed countries having an overwhelming influence over some of the most important WTO's decisions. They have seen the WTO as an opportunity to take control from the top, fully aware that their will be few substantial objections from developing countries from fear of repercussions, such as a decline in inward investment into their country and a stop in demand for their products. ...read more.

For the larger governments this is of no concern, they have the human resources to cover such demands and when in need of expert advice they can fly in experts from the relevant ministries. But the smaller countries with only a limited finance from the government struggle to keep up. This is evident from the interview with an African negotiator on the web site of CAFOD. (www.CAFOD.org). "It's not workable. They know you are weak and you walk out frustrated. I've been attending meetings for four years and it's hard to write two lines about how my country has benefited." From this it could be believed that it is a deliberate intention from the WTO, or dominating countries to timetable meetings in such a compact way preventing the less developed from even attending let alone contributing to the meetings discussion. If not deliberate then it is negligence on their part, not taking in to consideration their restricted resources but this is unlikely. This is blatant oppression of the less developed countries. If "all decisions are made by member governments" isn't it a vital requirement for all governments to be present? ...read more.

"They are allowed because of the US and Europe's power to write the rules to suit themselves." (www.caa.org.au) As a result, being undermined means being undercut on the world market. Australia are being punished for abiding by the rules of the WTO, whilst the US and EU are helping themselves to an unfair competitive advantage. It is too simple to conclude that the WTO is totally to blame for the oppressive attitude towards less developed countries, and those with unpopular products. Because there are two other crucial players in this farce that they call a democratic organisation. Both the US and EU are displaying a lack of ethics in their attempt to personally mould the WTO into an organisation which works towards their own trading ideals, consisting of no moral principles. The WTO has to foot some of the blame. Reading through the literature offered on the official web-site. They promote themselves as a saviour to the dysfunctional world trade economy. Some could claim these current times a success. The WTO now functions in accordance to the US' and EU's expectations. If this is the future of the WTO then there will never be a level playing field; the likes of Africa will always be shooting uphill. Joe Williams ...read more.