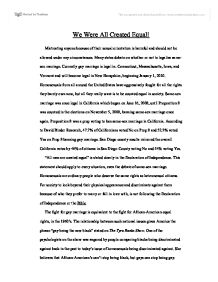 We Were All Created Equal

We Were All Created Equal! Mistreating anyone because of their sexual orientation is harmful and should not be allowed under any circumstances. Many states debate on whether or not to legalize same-sex marriage. Currently gay marriage is legal in: Connecticut, Massachusetts, Iowa, and Vermont and will become legal in New Hampshire, beginning January 1, 2010. Homosexuals from all around the United States have aggressively fought for all the rights they barely own now, but all they really want is to be counted equal in society. Same-sex marriage was once legal in California which began on June 16, 2008, until Proposition 8 was counted in the elections on November 5, 2008, banning same-sex marriage once again. Proposition 8 was a prop voting to ban same-sex marriage in California. According to David Binder Research, 47.7% of Californians voted No on Prop 8 and 52.3% voted Yes on Prop 8 banning gay marriage. San Diego county results mirrored the overall California votes by 46% of citizens in San Diego County voting No and 54% voting Yes. "All men are created equal" is stated clearly in the Declaration of Independence. This statement should apply to every situation, even the debate of same-sex marriage. ...read more.

If the government created laws upon religion then abortion would be illegal. David Binder researched that 94% of voters who voted yes on prop 8 were mostly influenced by religion and the Bible. This issue is not only a national issue, but also a global issue. Around the world there are many different beliefs on why or why not same-sex marriage should be legal or illegal. In some parts of Africa, Europe, South America, and Asia there are penalties for homosexuality. Some penalties are minor resulting in some jail time and Some are dreadful with results of life in prison or even death (http://www.aaronendre.com). Ask yourselves, why should you be killed because of who you are? State legislators should overlook bans against same-sex marriage because it is harmful to many families. Same-sex couples should not be discriminated against because of who they prefer to fall in love with. Life is short so why not live it to the fullest? The greatest thing to do is to come home and lay in bed with your husband or wife. The true meaning of marriage is a relationship in which two people have pledged themselves to each other. ...read more.

Geography: The northeast is for; the west coast is about evenly split; the rest is against. Most American adults currently oppose SSM, but the trend is towards increasing acceptance. If current trends continue, most American adults who have an opinion on the topic will be supportive of SSM sometime in the 2010's. LivingVote.org has followed the debate over Proposition 8 in California, which terminated SSM in that state. LivingVote's visitors have posted three arguments for and three against SSM which seem to reflect Americans' main concerns: Arguments for SSM Dignity & respect: "The institution of marriage conveys dignity and respect towards a couple that make a lifetime commitment to support each other. "Same-sex couples deserve this dignity and respect." Equal rights: Denying marriage to same-sex couples removes from one group a fundamental, important human right -- the right to marry the person that one loves and to whom one has made a commitment. That is unfair and unjust in a democracy. Financial & security: Denying one group the right to marry has many adverse emotional and financial consequences. Examples are Social Security, Medicare, medical leave, and other benefits; property inheritance; the right to visit their spouse in hospital, and make medical decisions if they are incapacitated; security of the couple and of their children. ...read more.