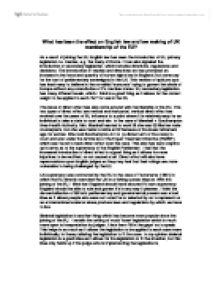 What has been the effect on English law and law making of UK membership of the EU?

What has been the effect on English law and law making of UK membership of the EU? As a result of joining the EU English law has seen the introduction of EU primary legislation i.e. treaties, e.g. the treaty of Rome. It has also signaled the introduction of secondary legislation, which includes directives, regulations and decisions. The introduction of treaties and directives etc has prompted an increase in the force and quantity of human rights law in England, but some say for the cost of parliamentary sovereignty in the UK. This version of quid pro quo has lead many to believe in the so-called 'eurocrats' trying to govern the whole of Europe without any consultation of it's member states. EU secondary legislation has many different levels, which I think is a good thing as it allows for the correct weight to be applied to each 'Act' for use in the EU. ...read more.

Direct effect will also have repercussions upon English judges as they may feel that their rulings are more vulnerable to being challenged by the EU. UK supremacy was confronted by the EU in the case of Factortame (1991) in which the EU directly overruled the UK in a fishing quotas dispute. With the joining of the EU I think that England should have secured it's own supremacy. England should be able to rule and govern it's in any way it pleases, I think the de-centralisation of Briton's parliamentary and governmental powers was a bad idea as it allows people who were not voted for or selected by us to represent us on a international scale let alone produce laws and regulations by which we have to live. Skeletal legislation is another thing which has become more popular since the joining of the EU. It entails the writing of much 'loser' legislation which is much more open to interpretation by judges, it lets them 'fill in the gaps' so to speak. ...read more.

I think this is a good idea as it is an independent look at legislation which will point out any problems which could arise as a result of badly written or unreasonable legislation. English law making has been affected by membership of the EU four fold; one way is that the sovereignty of English law has (to a certain extent) been removed. The second is the legislation that is written has become much more basic and skeletal, it only outlines what is wanted unlike legislation of the past which stated everything right down to the crossing of the t's and dotting of the I's. Thirdly an independent watchdog has been put into place over parliament (preliminary opinion in the E.C.J) And lastly when English legislation is written it is becoming more and more Eurocentric to stay in line with the rest of Europe, I think this is not a very good idea we are losing our heritage and becoming less British and more European which in some aspects is a good thing, but not in all aspects. ...read more.