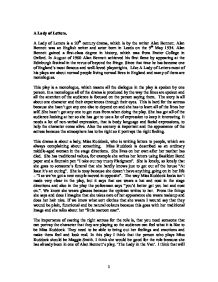 A Lady of Letters.

A Lady of Letters. A Lady of Letters is a 20th century drama, which is by the writer Alan Bennett. Alan Bennett was an English writer and actor born in Leeds on the 9th May 1934. Alan Bennett gained a first-class degree in history, which was from Exeter College in Oxford. In August of 1960 Alan Bennett achieved his first fame by appearing at the Edinburgh festival in the revue of beyond the fringe. Since that time he has become one of England's most famous and well-loved playwrights. Like A Lady of Letters most of his plays are about normal people living normal lives in England and many of them are monologues. This play is a monologue, which means all the dialogue in the play is spoken by one person. In a monologue all of the drama is produced by the way the lines are spoken and all the attention of the audience is focused on the person saying them. The story is all about one character and their experiences through their eyes. This is hard for the actress because she hasn't got any one else to depend on and she has to learn all of the lines her self. ...read more.

When the lights come up you see Miss Ruddock just sitting the chair looking out of the window. The room in which Miss Ruddock is sitting it is very old fashioned it is decorated with old wallpaper and the chair is an arm chair that old people would sit in. The lack of furniture helps to give the impression that she is lonely and isolated. She is looking out of the window because she likes to see what goes on outside because her own life is very boring. The room is old fashioned because this goes with her traditional views and sets her apart form the changes in society that are going on around her. In contrast the end scene is going to be in just a blank room with just a window in it and a table. The window is high up towards the ceiling. When the light comes on there is Miss Ruddock sitting behind a table and there is just light on her which is coming from the window, which is above her. When she is talking the people that she is talking about they will be standing there and the light goes onto them then off again. ...read more.

This has been my go." In conclusion I think that this is a play that needs a lot of expression in it so that it will portray Miss Ruddock's changing emotions. The play needs to be staged in a way that doesn't detract form the words as it is the words, not the action, that express all of the feelings in the play. The actress needs to be able to hold the attention of the audience and portray Miss Ruddock's emotions in a way that they can understand and sympathise with. The scenery and staging is important as it can be used to show Miss Ruddock's change from being unhappy to happy. I think that the play is showing that you don't have to be on your own there are always people to talk to even if you don't know them you can get to know them and make friends, you can be happy and around people. There are other things that you can do for example not write letters but learn something new, for example when Bridget is telling her how to have sex and also the fact she says "they've got me smoking now and then". Rachel Savage 11C2 8th September 2003 4 ...read more.