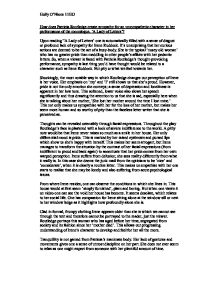 How does Patricia Routledge create sympathy for an unsympathetic character in her performance of the monologue, 'A Lady of Letters'? Upon reading "A Lady of Letters' one is automatically filled with a sense of disgust or profound lack of sympathy for Irene Ruddock. It's unsurprising that her curious actions are deemed to be the act of a busy-body. She is the typical 'nosey old woman' who has no greater pride than meddling in other people's affairs with her pedantic letters. So, when a viewer is faced with Patricia Routledge's thought-provoking performance, sympathy is last thing you'd have thought would be related to a character such as Irene Ruddock. But pity is what we feel towards her. Shockingly, the most notable way in which Routledge changes our perception of Irene is her voice. Her emphasis on 'my' and 'I' still shows us that she's proud. However, pride is not the only emotion she conveys; a sense of depression and loneliness is apparent in her low tone. This softened, lower voice also slows her speech significantly and thus drawing the attention to us that she is sad, especially here when she is talking about her mother, 'She lost her mother around the time I lost mine.' ...read more.

Routledge portrays this woman who has aged before her time, segregated from society and its fashion since her 'mother died'. This allows our progressing understanding of Irene's character to develop and feel for her all the more. Tranquillity is not gained from Patricia's inanimate body. Her lack of gestures and movements gives one a sense of utmost discipline on her part. She does not ever seem to relax as one might expect from someone with her plentiful amount of time. One is filled with compassion for someone who does not allow herself to relax nor enjoy herself. Her standards of discipline are so high that she views prison as a 'holiday camp'. Another reference to her unsound mind is underlined by her constant intertwining of her fingers and the nervous wringing of her hands. Although this may not seem to be poignant at first, in context one would feel pity towards her unsettled state. At first this could have been viewed as an impatient habit from someone so fixated in routine to the point she always has nothing to do Wednesday afternoons and 'dangles her feet a bit.' ...read more.

Movements and gestures are bigger and louder as if even her limbs have more freedom. Even her once consistent voice has quickened; her excitement spurred on the following words. One realises how much she has changed and thus are heartened by the new joy she has found. However, it is tragic for the viewer to hear that she has not felt this way before imprisonment, and in ways the reader never considers imagining. Importantly, the reader experiences a cold and insensitive reaction when Irene finds out the 'kiddie' has leukaemia. One is aghast towards how bluntly brutal she is when regarding the subject. In contrast, Routledge portrays a quiet sorrow upon the discovery of the kiddie's illness, which cannot be conveyed through the text alone. Thus, we are no longer unsympathetic towards Irene as she no longer appears the stereotypical, cold-hearted spinster. However, despite the happiness in this scene we see how evocative it really is. For it took for such a terrible thing to unleash happiness in her life. One pities her and foremost feels guilty for once perceiving her as such an unsympathetic individual. Only at the end can one realise how much empathy we really feel for her thanks to the combination of Routledge's abilities. ?? ?? ?? ?? Holly O'Nione 11HO ...read more.