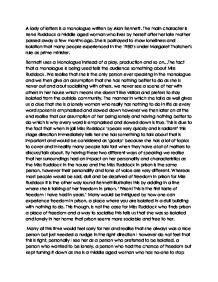 A lady of letters is a monologue written by Alan Bennett. The main character is Irene Ruddock a middle aged woman who lives by herself after her late mother passed away a few months ago. She is portrayed to show loneliness and isolation that many people experienced in the 1980's under Margaret Thatcher's rule as prime minister. Bennett uses a Monologue instead of a play, production and so on...The fact that a monologue is being used tells the audience something about Miss Ruddock. We realise that she is the only person ever speaking in the monologue and we then give an assumption that she has nothing better to do as she is never out and abut socialising with others, we never see a scene of her with others in her house which means she doesn't like visitors and prefers to stay isolated from the outside community. The manner in which she talks as well gives us a clue that she is a lonely woman who really has nothing to do in life as every word spoken is emphasised and slowed down however we then later on at the end realise that our assumption of her being lonely and having nothing better to do which is why every word is emphasised and slowed down is true. This is due to the fact that when in jail Miss Ruddock 'speaks very quickly and is radiant' this stage direction immediately tells her she has something to talk about that is important and would be considered as 'gossip' because she has a lot of topics to cover and in reality many people talk fast when they have a lot of matters to discuss/talk about. ...read more.

This though is her fault as it was her personality and behaviour that caused this as she comments on the neighbours during the monologue in such a way we can tell that she must've done something to stop all contact 'hasn't been any contact since the business over the dustbins' as you can see it seems to be generally a unnecessary thing to have an argument over and her way of wanting everything perfect has caused her to not have any friends. Therefore I personally do not again feel any sympathy for her as she has bought it upon herself yet people may still argue that the pen was in fact given to her by her mother which it was and therefore reminds her of her mum an she may think of the pen as sentimental value and may think of it as a way of talking to her mum. But overall the audience after those two lines will either go one of two ways, they will either see her as a woman who has stooped so low and has become so lonely she resorts to talking to the pen and seeing it as a friend or more kind-hearted people will think of her as a person who misses her mother and sees the pen as sentimental value. Alan Bennett then uses a stage direction straight away to emphasises her isolation and in turn these stage directions will cause the audience to realise how isolated and cut off she is from the rest of the world. ...read more.

Miss Ruddock also feels more free and isn't just confided anymore, a line which clearly illustrates my point is 'this is the first taste of freedom I've had in years' this clearly shows how isolated Miss Ruddock was because we all see prison as a isolated and boring place, but for her to be able to see it as freedom must've meant that the isolation in which she lived in before was absolute insane. What also helps is that her writing stationery isn't there meaning she can't write letters and the fact that she is involved in different classes such as patch quilting and others takes her mind off letters and this in turn makes her a better person. However some of the audience may think she was forced to socialise and had no other choice, on the other hand other members of the audience will rightly argue that she always had a truly caring and lovely personality a line which portrays this is 'sit by the bed and hold her hand till she'd gone off again' as we can see she cares for her 'friends' and is a nice person. This will have the audience ponder her true personality. In the 1980's the contemporary audience at that time may have seen more and managed to read between the lines, that Bennett was in fact encouraging people to socialise and become a community something which Margaret Thatcher said didn't 'exist' and we now understand that he was secretly rebelling and trying to alter people's views and opinions. Bennett uses pauses many times throughout the monologue to create tension and allow the audience to reflect on the last few lines. ...read more.