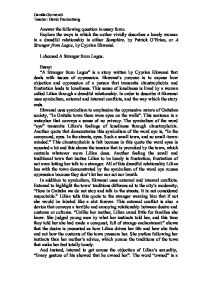 A Stranger from Lagos

Answer the following question in essay form: Explore the ways in which the author vividly describes a lonely woman in a dreadful relationship in either Samphire, by Patrick O'Brien, or A Stranger from Lagos, by Cyprian Ekwensi. I choosed A Stranger from Lagos. Essay: "A Stranger from Lagos" is a story written by Cyprian Ekwensi that deals with issues of oppression. Ekwensi's purpose is to expose how objection and oppression of a person that transmits claustrophobia and frustration leads to loneliness. This sense of loneliness is lived by a woman called Lilian through a dreadful relationship. In order to describe it Ekwensi uses symbolism, external and internal conflicts, and the way which the story ends. Ekwensi uses symbolism to emphasize the oppressive nature of Onitshan society, "In Onitsha town there were eyes on the walls". This sentence is a metaphor that conveys a sense of no privacy. ...read more.

It is not considered respectable." Lilian tells this quote to the stranger warning him that if not she would be labeled like a slut forever. This external conflict is also a device that conveys a terrible and annoying relationship between desire and customs or cultures. "Unlike her mother, Lilian cared little for families she knew. She judged young men by what her instincts told her, and this time they told her she had made a conquest, full of strange enchantment." shows that the desire is presented as how Lilian drives her life and how she feels and not how the customs of the town pressure her. She prefers following her instincts than her mother's advice, which pursue the traditions of the town that make her feel totally lonely. And instead, internal to get across the objection of Lilian's sexuality, "Every gesture of his showed that he owned her". ...read more.

This quote could be seen as also an internal conflict because she didn't have the courage to escape. When I say escape, I mean by really following her feelings and not ending up lonely with her fianc� that blames her for things she didn't even do and that she has to pay for. However, as Lilian complied with the traditions of the small town she will stay forever lonely and hopeless. A Stranger from Lagos is a story that transmits the reader to always follow their nature and live joyfully or else they would feel lost and repentant. For me this story was interesting because it makes me see the world differently, meaning that the traditions of every country or religion are actually very important for every family. However, thank you to Ekwensi, no matter how strict the traditions are you must always do what you think the best would be for you. Camila Gurmendi Teacher: David Frankenberg ...read more.