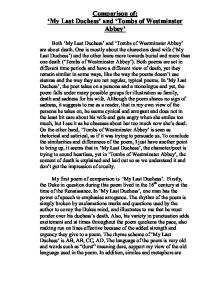 Comparison of: 'My Last Duchess' and 'Tombs of Westminster Abbey'.

Comparison of: 'My Last Duchess' and 'Tombs of Westminster Abbey' Both 'My Last Duchess' and 'Tombs of Westminster Abbey' are about death. One is mostly about the characters dead wife ('My Last Duchess') and the other leans more towards burial and more than one death ('Tombs of Westminster Abbey'). Both poems are set in different time periods and have a different view of death, yet they remain similar in some ways, like the way the poems doesn't use stanzas and the way they are not regular, typical poems. In 'My Last Duchess', the poet takes on a persona and a monologue and yet, the poem falls under many possible groups for illustration as family, death and sadness for his wife. Although the poem shares no sign of sadness, it suggests to me as a reader, that in my own view of the persona he takes on, he seems cynical and arrogant and does not in the least bit care about his wife and gets angry when she smiles too much, but I see it as he obsesses about her too much now she's dead. ...read more.

Examples of both are "looking as if she were alive" and "my gift of a nine hundred years old name". The poet takes on a persona (role taken on by poet) for characterisation of the speaker and to help to familiarize with the character, yet as we only hear him, we are inclined to partly agree with him. The tone of the poem is conversational, relaxed, calm and in my view arrogant as I mentioned above. Nonetheless, words such as selfish and egotistic in my view are appropriate. I think that the poet's attitude to 'My Last Duchess' is very relaxed and laid-back, as the language shows he is not afraid to widen his use of old language and broaden his views of 16th century love and death, which he broadens professionally. The layout of 'My Last Duchess' is not a regular poem it has no stanzas, it is longer than traditional poems. My second poem of comparison is 'Tombs of Westminster Abbey'. ...read more.