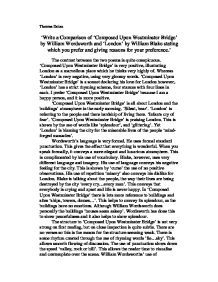 'Write a Comparison of 'Composed Upon Westminster Bridge' by William Wordsworth and 'London' by William Blake stating which you prefer and giving reasons for your preference.'

Although William Wordsworth does personify the buildings 'houses seem asleep'. Wordsworth has done this to show peacefulness and it also helps to show splendour. The structure to 'Composed Upon Westminster Bridge' is not very strong on first reading, but on close inspection is quite subtle. There are no verses so this is the reason for the structure seeming weak. There is some rhythm created through the use of rhyming words 'lie...sky'. This allows smooth flowing of discussion. The use of punctuation slows down the speed 'valley, rock or hill'. This allows the reader time to visualise and contemplate over the scene. William Wordsworths' use of semicolons throughout the poem emphasises the words that follow, as it causes the reader to pause. The use of emphasis conveys great suspense, which helps create wonder and marvel inside the reader's mind. William Blake uses a very strict structure that is constructed of four stanzas, each with four lines. ...read more.

'Composed Upon Westminster Bridge' is written from an overview of the city and so William Wordsworth has and idealistic view of London, the 'mighty heart' of the whole country. 'London', however, is really in the heart of London and so William Blake has a realistic view of London, the poverty of London 'runs in blood down palace walls'. The only similarity between the two poems is that they are both based on London. I prefer 'Composed Upon Westminster Bridge' as I am an optimistic person, and try to look for the best in everything. This poem is very fresh and uplifting, it made me feel happy and so I preferred reading it. Although I prefer 'Composed Upon Westminster Bridge', I found 'London' the most effective. After reading 'London'. I felt very emotional, as it was very thought provoking, and filled with lots of negative imagery which stays in your mind. It was also filled with ver strong negative emotions, which effected my emotions much more than positive ones. ...read more.