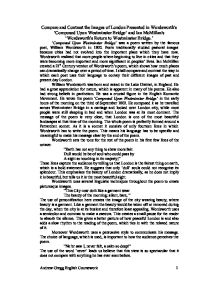 Compare and Contrast the Images of London Presented in Wordsworth's 'Composed Upon Westminster Bridge' and Ian McMillan's 'Wordsworth's Return to Westminster Bridge.' 'Composed Upon Westminster Bridge' was a poem written by the famous poet, William Wordsworth in 1802. Poets traditionally studied pastoral images because cities had not evolved into the important place which they have now. Wordsworth realized that more people where beginning to live in cities and that they were becoming more important and more significant in peoples' lives. Ian McMillan created a 21st Century version of Wordsworth's poem, which shows how much places can dramatically change over a period of time. I shall compare and contrast the way in which each poet uses their language to convey their different images of past and present day London. William Wordsworth was born and raised in the Lake District, in England. He had a great appreciation for nature, which is apparent in many of his poems. He also had strong beliefs in pantheism. He was a crucial figure in the English Romantic Movement. He wrote the poem 'Composed Upon Westminster Bridge' in the early hours of the morning on the third of September 1802. He composed it as he travelled across Westminster Bridge in a carriage and looked over London city, while most people were still sleeping in bed and when London was at its most dormant. ...read more.

Wordsworth's poem builds a clear message, which is enforced in many linguistic techniques and styles. He uses several examples of personification to share his message. He makes an extremely clear message that London is at its most beautiful during sunrise, and possibly the most beautiful sight ever. Commissioned by the Globe Theatre in the year 2002, Ian McMillan wrote the poem titled 'Wordsworth's Return To Westminster Bridge'. It strikes me immediately how very different both poems are. This is most definitely because of the effect 200 years has had on London. In the space of two centuries an industrial revolution has occurred making the city of London larger, with more people and more buildings. In fact, land which used to be fields is now covered with buildings and roads, in contrast to Wordsworth's time. The message of McMillan's poem is that London is an awful dirty place and that he is reluctant to live there. As McMillan is working off Wordsworth's poem, it seems that he is arguing and trying to prove a point to Wordsworth, that his image of London is wrong. McMillan's poem is structured around a Shakespearean sonnet. The rhyme scheme, which he has achieved, is not exactly a Shakespearean sonnet, but very similar to one. ...read more.

This confusion makes the audience unsure, which gives the impression of London being a mess. The final line of the poem shows how much McMillan loathes London. He says how he is happy that he lives in the 'civilised' north, referring to the north of England. This would imply to the audience that London, the south, is not civilised, but savage and dirty. I have compared and contrasted the differences in poetic style and imagery in both poems. Wordsworth's poem brings out the full potential beauty in London, whereas McMillan's poem shows the modern day reality of dirt and pollution, which is now found in most cities. London would have dramatically evolved from what it was 200 years ago because of advances in technology, meaning people depend on machines more than manual labour. This would draw people from the countryside into the city and the city would therefore get larger with more and more buildings. Personally I prefer McMillan's version of Wordsworth's 'Composed Upon Westminster Bridge '. 'Wordsworth's Return To Westminster Bridge' is more realistic and a clearer picture of what a city is, for me. This is probably because I could not depict a city as being beautiful. Andrew Gregg English Coursework 1 ...read more.